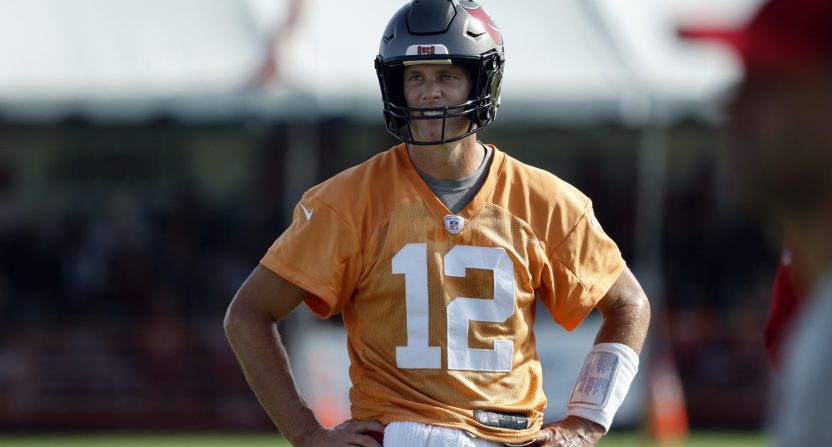 It has been a wild offseason for Tampa Bay Buccaneers quarterback Tom Brady, who previously retired only to un-retire a month later, and then had a sustained absence for personal reasons last month during training camp.

He explained his absence with a very vague response following his preseason debut against the Indianapolis Colts, saying that “there’s a lot of sh*t going on.”

A story came out on Thursday that seems to paint a much clearer picture about what exactly is going on in Tom Brady’s life that may have caused the absence.

According to Pagesix.com, Brady’s wife Gisele Bündchen has left their family compound in Tampa, Florida after several heated arguments that stem from Brady’s decision to un-retire from the NFL.

A source reportedly close to the situation told Page Six that there is “trouble in their marriage” due to this decision, with Gisele having to always be with the kids while Brady is taking care of his NFL responsibilities.

Brady has made it clear in the past that his family would be the deciding factor in his eventual retirement, and it appears that he went against Gisele’s wishes by un-retiring/

It’s never a good situation to hear about a marriage struggling, and many feel for Tom Brady as he battles personal issues along with preparation for the upcoming season, which is a little over a week away.

I know tons of Dads who have been in the spot Tom Brady is in with the wife and work/life balance. Difficult, NOT fun.

Can't imagine dealing with it having a national spotlight on you

✨you don’t know exactly what is going on in someone else’s marriage✨ https://t.co/KSSWpib9AP

Literally texted my friend yesterday that they will be divorcing within a couple years. Their Instagram posts are very telling. Not gushing over each other like they used to. Something is up, not that it’s any of our business…. https://t.co/5lmJ6VMpz2

Not shocked at all. Any wife of a 45 year old QB, regardless of how good they are, probably just wants them to do their parenting now. I do not blame Gisele one bit at all. https://t.co/d7dqqtkAEq

A healthy balance between work and life is difficult for any normal person. In Brady’s case, being the best at your craft has to make it extremely difficult to put enough effort into life at home.

At 45 years old, Brady is still playing the quarterback position at an elite level, but this certainly puts his NFL future into question, considering the strain that his return to football has apparently put on his personal life.