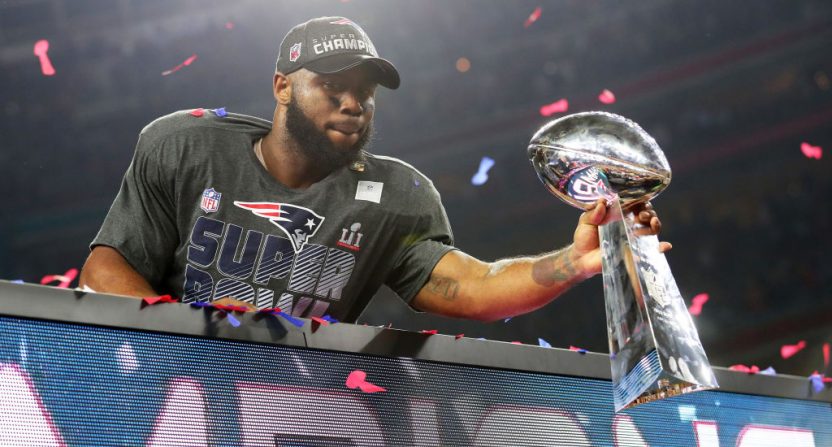 Once the New England Patriots locked down Super Bowl 51, there was no question that Tom Brady would be named MVP. Not only did he quarterback his team to his fifth Super Bowl win, but he also led an impressive comeback.

As part of his award, Tom Brady gets a pretty nice truck. But the thing is, he doesn’t think he deserves it.

Like he did two years ago, Brady plans on giving his prize away, and running back James White will be the recipient.

White had six rushes for 29 yards and two touchdowns on the ground. Through the air, the running back caught 14 passes for 110 yards and a touchdown.

At the end of the day, Brady is obviously happy with the Super Bowl win, but at the same time isn’t afraid to admit he doesn’t deserve the MVP.

The thing is, Brady can give it to him! Brady was named the MVP of Super Bowl XLIX in 2015, but he later gave the MVP truck to cornerback Malcom Butler for his game-winning/saving interception.

Apparently, Brady remembers doing that and plans on doing the same for White this year.

White, 25, was a fourth round pick by the Patriots out of Wisconsin back in 2014. The running back played a little, but not a ton, in his first two years in the league. However, in 2016, White really came on the scene and capped off his best year with the Super Bowl win.

To say his Super Bowl performance was MVP worthy is underselling it in a way. White accounted for 139 yards overall and three of the Patriots’ four touchdowns.

“He just does everything right and you can never get mad at him,” he joked. “Even when he doesn’t make the play, he feels worse about it than you do. He’s just the best teammate, an incredible player, and has been that way since he really assumed that big role when Dion [Lewis] got hurt [in November 2015]. I’m so proud of everything he’s accomplished. I’ve seen him grow up as a rookie, to working his tail off and becoming a big factor in all these games.”

White’s 110 receiving yards set a Super Bowl record for receiving yards for a running back. As ESPN pointed out, White has been the team’s “passing back” this season, a role previously filled by guys like Kevin Faulk and Danny Woodhead.

“They’re tough matchups; not only can they run, and not only can they catch, but they pass-protect too, so they bring a lot of toughness,” Brady said, praising running backs coach Ivan Fears for his work before turning his attention back to White: “It was a great performance by him when we needed it most on the biggest stage, and he really came through for us.”