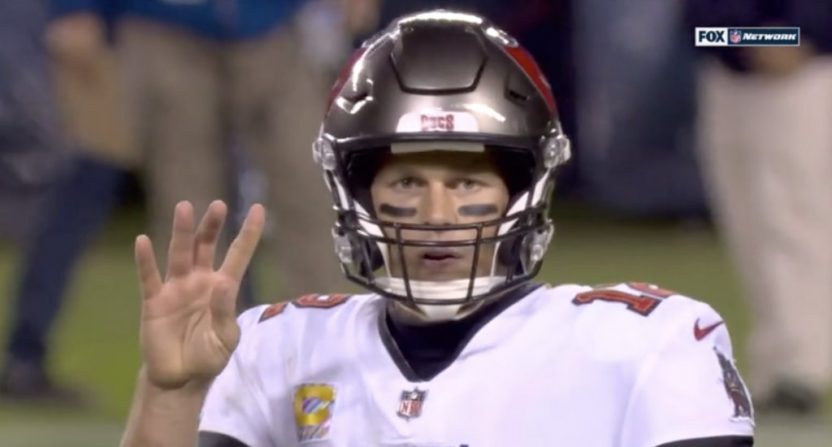 They say never count out Touchdown Tom, and that goes for retirement as well.

Last week, Tom Brady officially announced that he was retiring, ending a 22-year NFL career that included seven Super Bowl victories with the New England Patriots and Tampa Bay Buccaneers. The news came days after ESPN reported that Brady was planning to retire, though the quarterback initially rebuked that information.

Brady has always been a bit mysterious with his plans and it’s hard to know exactly what he’ll do next. According to him, what’s next might just possibly be a return to football after all.

“I’m just gonna take things as they come,” Brady said on Monday’s Let’s Go! With Tom Brady, Larry Fitzgerald, and Jim Gray podcast. “I think that’s the best way to put it and I don’t think anything, you know, you never say never. At the same time I know that I’m very, I feel very good about my decision. I don’t know how I’ll feel six months from now.

“I try to make the best possible decision I can in the moment, which I did this last week. And, again, I think it’s not looking to reverse course, I’m definitely not looking to do that. But in the same time, I think you have to be realistic that you never know what challenges there are gonna be in life. Again, I loved playing. I’m looking forward to doing things other than playing. That’s as honest as I can be.”

While Brady literally has nothing left to prove, leaving the door open for the mere possibility that he could return feels very much in line with his modus operandi. The odds are good that he won’t return, but leaving the door open a crack just in case makes sense for the guy who was talking about potentially playing until he was 50 just a few months ago.

And hey, if the Denver Broncos aren’t able to convince Aaron Rodgers to come their way, why not through the vault at Brady to come out of retirement for one more run. No one would fault you for it and you could draft a rookie to sit behind him and learn from the best. And if it doesn’t work out, hey, you probably made a ton in merchandising along the way.

“I was fortunate to do it for a long time, for 22 years,” Brady said of his playing days. “I did it at the highest level and I had the best teammates and mentors and coaches and friends. And, again, it’s just pretty simple, it’s just there’s time for other things, I need to make time for other things in my life. And it’s exciting for me to be able to really enjoy some of those new moments as well.”