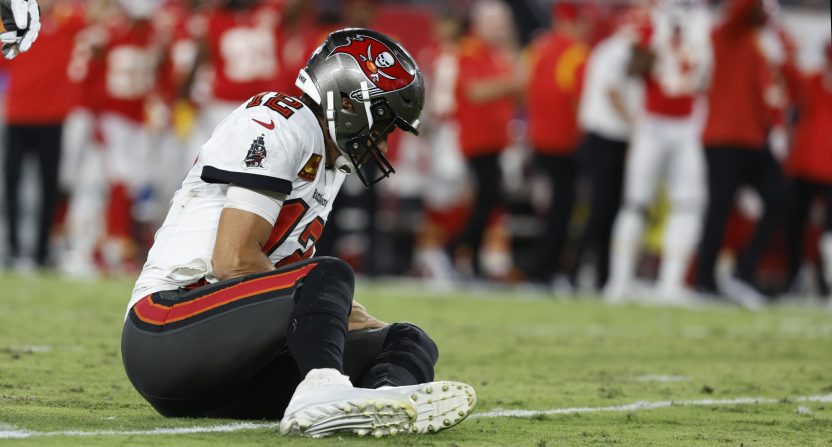 Tom Brady’s 23rd NFL season hasn’t gotten off to a great start. Along with his reported marriage issues with wife Gisele Bündchen, Brady is 2-2 with the Tampa Bay Buccaneers and has now reportedly picked up an injury though it seems he’ll be able to play through.

According to NFL Network’s Ian Rapoport, Brady suffered “a little bit of a rotator cuff” injury during the second quarter of the Bucs’ 41-31 loss to the Kansas City Chiefs. Brady was busy before and after the injury as he picked up 385 passing yards and three touchdowns.

Rapoport said, “My understanding is Tom Brady is going to be okay. He has played with, I would say, similar injuries in the past. Little bit of a rotator cuff deal, not believed to be major, not believed to be something that will limit him going forward. Just really something that Tom Brady’s going to keep an eye on… Tom Brady is going to be okay and I would say it’s nothing that will limit any of his accuracy or strength on his throws or really anything long-term. So nothing bad, and a little bit of good news there for Tom Brady.”

It’s never ideal to play injured but it seems like it won’t derail Brady’s season. Despite a 2-2 record, the Buccaneers remain leaders in the NFC South so if this is going to be their rough patch on the season, they’ll be sitting pretty heading toward the winter.