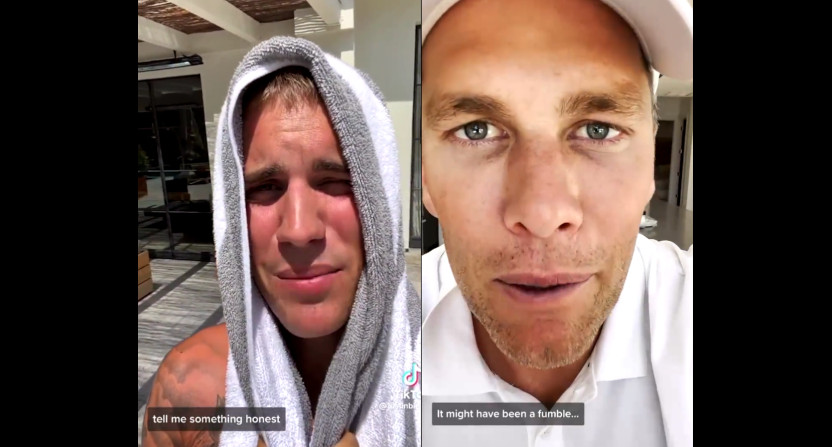 Twenty years after it happened, the Jan. 19, 2022 AFC divisional playoff “Tuck Rule” game between the Oakland Raiders and the New England Patriots is still inspiring a lot of discussion. ESPN came out with a 30 for 30 documentary on it earlier this year, which largely centered around Tom Brady and Charles Woodson discussing their different perspectives on the play. In that documentary, Brady said that if not for the officials’ ruling on that play (that it was an incomplete pass rather than a fumble), “I’m probably the backup QB going into 2002. ” Brady, the once and current Tampa Bay Buccaneers‘ quarterback, also discussed that play in the first episode of the Religion of Sports/ESPN series Man In The Arena last fall. And now, he’s bringing it up on TikTok, where in potentially-trolling fashion, he responded to Justin Bieber‘s “Tell me something honest” prompt with “The Tuck Rule play…might have been a fumble.”

Everyone keep this on the down low please. pic.twitter.com/xPtrg1kXjr

This fits in with some of the less-than-purely-serious social media usage we’ve seen from Brady (and the Shadow Lion company that he works with on his social media) in the past, including his TB Times fake newspaper he posted on social media from 2016-18 (which even got riffed on by the old Fox Sports Live at one point). He’s got a good sense of humor that can involve laughing at himself (see his parade advice to Matthew Stafford), and the people he works with on social media tend to help him get that across. And “Tom Brady says Tuck Rule might have been a fumble in response to Justin Bieber” is just a funny set of words in general.

(Can we talk about Brady wearing a “Brady” hat, though? Is he now old enough that he wouldn’t remember his name without that?)