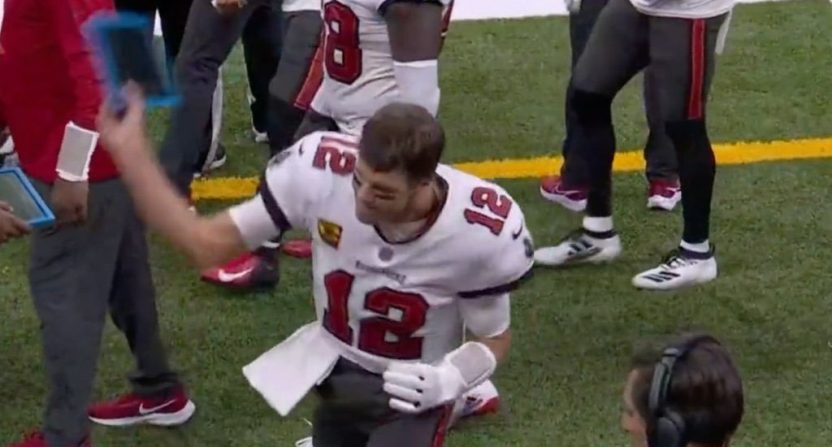 The NFL world had some fun last week with the clip of Tampa Bay Buccaneers quarterback Tom Brady smashing a Microsoft tablet on the ground in frustrating during their game against the New Orleans Saints. However, ESPN NFL insider Adam Schefter reported on Sunday that Brady actually broke two tablets that day.

In fact, according to Schefter, “a third tablet also was stepped on and broken on the Buccaneers’ sideline, sources said, leaving Tampa Bay short of tablets and wide receivers against the Saints.”

What did those tablets ever do to you, Tom?

Brady did apologize for busting the tablet last Monday on his podcast.

“I’ve had a pretty bad record against that tablet, unfortunately,” Brady said. “I think I forgot the password and I couldn’t log in, so those things can be frustrating.

“Unfortunately, the tablet just happens to get in the way, and obviously that’s the reason things weren’t going great [against the Saints], so I had to take it out on the poor meaningless tablet.”

Of course, it’s a bit of a silly story, but then again, it does seem to add smoke to the fire about the frustration and issues that the 45-year-old is dealing with, on and off the field. Brady is reportedly dealing with marital issues caused by his return to the NFL. He’s also working through a hand injury, commentary about how he’s looking. the effects of aging, rumors about where he goes when he’s not practicing, and an apparent ultimatum about his future.

We’re not saying the tablets deserved to be smashed, but we can understand that he needs to vent all of that somewhere.

According to my sources, a picture of Gisele was the screen saver for both of these devices https://t.co/DeXiN87iM3

This is literally ‘breaking news’ https://t.co/G6Pu2YF8Dl

He might break 3 with the receivers he’ll be throwing to today https://t.co/RK1mP6gUIG

after the game, Microsoft engineers thanked Brady for providing them with useful data to improve the durability of their product..thankfully, they‘ve pinpointed the material used for the screen as an area of weakness https://t.co/Y2wgvuqVFG