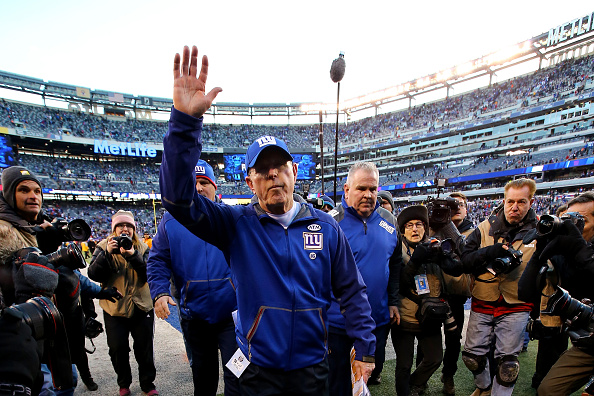 As the NFL continues through Black Monday, New York Giants head coach Tom Coughlin has met the end of the line as head coach of the G-Men. Coughlin has told his coaching staff the Giants will be making a change at the head coach position, and later released a statement confirmed that he had stepped down as head coach.

Tom Coughlin has informed his coaching staff that the Giants are making a head coaching change, source tells ESPN.

Coughlin, 69 years old, appeared to be coming down the stretch of his coaching career the last couple of seasons. Since winning the Super Bowl in the 2011 season, the second championship the won under Coughlin, the Giants have regressed in win totals and have just closed the books on a second straight 6-10 season and a third straight years finishing under .500. Regardless of Coughlin’s age and accomplishments, three consecutive losing seasons will spell doom to just about any coach in the National Football League in a “what have you done for me lately” society.

Coughlin released a statement regarding his departure.

“I met with John Mara and Steve Tisch this afternoon, and I informed them that it is in the best interest of the organization that I step down as head coach. I strongly believe the time is right for me and my family, and as I said, the Giants organization.

“It has been an honor and a privilege to serve as head coach of the New York Football Giants. This is a not a sad occasion for me. I have spent 15 years with this organization as an assistant and head coach and was fortunate to be part of three Super Bowl winning teams. A Lombardi Trophy every five years is an achievement in which we all take great pride.

“Obviously, the past three years have not been what any of us expect, and as head coach, I accept the responsibility for those seasons.

“I think it has been evident these last 12 years here how much pride I take in representing this franchise. I am gratified and proud that we were able to deliver two more Lombardi trophies to the display case in our lobby during that time. That is a tribute to our players and staff, and it was truly fulfilling to be the leader of those teams.

“I appreciate the support of John and his family and Steve and his family, and of Jerry Reese and his staff. I think our organization is a great representation of what I mean when I talk about ‘team’.

“Finally, I would be remiss if I did not thank my wife Judy and our four children and their spouses and our 11 (soon to be 12) grandchildren. None of this would have been possible without their unconditional love and support.”

Assuming Coughlin does not take another head coaching job, this will bring his 20-year career as a head coach to a close, and it has been quite an interesting one. The two-time Super Bowl-winning head coach took out one of the top teams over the span of the past decade and a half, the New England Patriots with Bill Belichick and Tom Brady, but his coaching career also ushered in the expansion Jacksonville Jaguars. In 1995 the Jaguars made Coughlin its first head coach in franchise history, and it was his first job as a head coach in the NFL as well.

It took just two years to build a winning team in Jacksonville and three to reach double digits in the win column. Jacksonville won 11 games in 1997 and 1998 and then went 14-2 in 1999. After a year off from coaching in 2003 after being let go by Jacksonville, Coughlin resurfaced as a head coach with the Giants, building a foundation on defense and guiding the team on two miraculous Super Bowl runs in 2007 and again in 2010.

However, one man that won’t be leaving the Giants is GM Jerry Reese. He’s reportedly safe.

The team will hold a press conference tomorrow morning that includes Coughlin.

This also opens a high-profile coaching vacancy in the NFL coaching world. The New York Giants are known as one of the better franchises, at least in terms of in-house stability, and now the NFC East franchise has an opportunity to find another coach capable of taking on a long-term commitment. It is a job that should be of interest for any number of candidates, and it may be the best open job on the NFL market right now because of the New York connection.