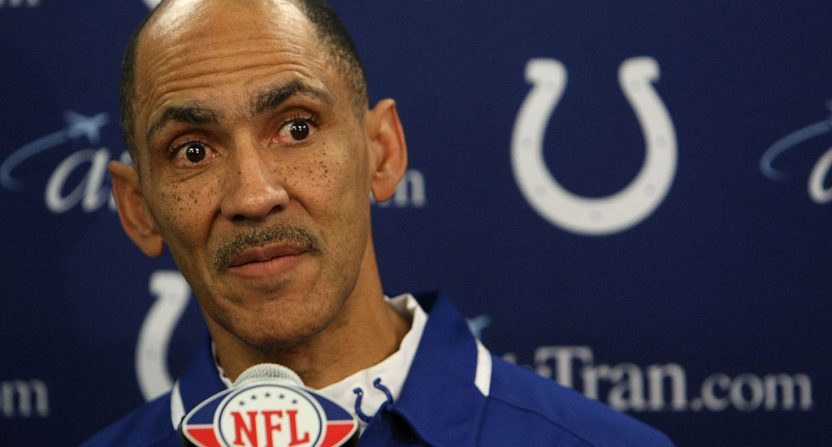 Tony Dungy was the head coach of the Indianapolis Colts from 2002 to 2008. Nine years after his tenure in Indy ended, Dungy has no problem admitting his team stole signs.

But that’s okay because everyone did it and it was (kind of) legal!

The story emerged not from Dungy, but Hall of Famer Deion Sanders, who said the Colts were wrong for stealing signs while Dungy and Peyton Manning were in Indianapolis.

Dungy then responded this morning on Pro Football Talk Live with a strong statement.

“I think we have to go back to what is cheating,” Dungy said. “People accusing us of cheating? I don’t think that’s the case. Stealing signals? You can go back to the 1800s in baseball, you can go anywhere there were signals done, and people were looking and watching and trying to get signals. Back in the early days of football the quarterbacks called the plays and the middle linebackers called the defenses and there was no signaling. When coaches decided they wanted to call plays you had to find ways to get the information in and there were people watching. My coach, Chuck Noll, was a messenger guard for Paul Brown in the ’50s because Paul Brown didn’t want to have to signal because people are going to watch them. So that’s what happens and it’s been done legally for years.”

The TL;DR version? Dungy asserted that stealing signs was completely legal and that everyone in the NFL did it. At the same time, Dungy fired back at Sanders for asserting what Dungy did was similar to the New England Patriots’ Spygate scandal. The Patriots videotaped opponents’ signals while Dungy’s staff would simply decipher opponents’ signals without spying.

“Deion, I’m sure on every scouting report that he ever got, the first thing that’s on there on the defensive scouting reports, who is the live signal caller, who signals the personnel groups in. And that’s what happened. And you looked over there because you wanted to know as a defensive player: Is it going to be three wide receivers? Is it going to be two tight ends? Who’s in the game? There’s a person over there signaling and Deion Sanders and every other defensive player would look at the offensive sideline to get that signal. So that is football. And I’m not sure what Deion is referring to, really,” Dungy went on to say.

Dungy does make great points here while firing back at Deion. Everyone did it, so it’s okay, I guess? The same argument gets made every year when people are arguing if steroid users should be allowed into the Baseball Hall of Fame.

At the end of the day, as PFT points out, it’s a little confusing why seemingly out of nowhere Deion would target the Colts.

“That’s all part of the game, but doing it legally and illegally, that’s the difference. I hope Deion is not saying we did something illegally. Of course we got signals when we had an opportunity to do that, and so did Deion… What was different with Spygate is that teams had specifically been instructed not to videotape opposing teams’ signals on the sideline during the game, and the Patriots did it anyway,” Dungy said. “It wasn’t getting signals, it was the process of videotaping and using electronic equipment during the game.”