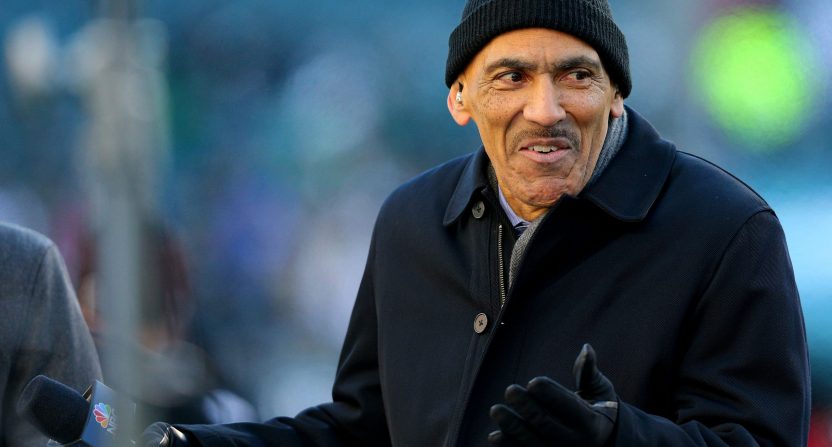 Tony Dungy, the Hall of Fame football coach and current NBC analyst, hasn’t been shy in sharing his opinion. He recently chimed in on the Urban Meyer debate with some strong words and he also offered a strong defense of Jon Gruden on Sunday following the release of one email with derogatory comments about NFLPA executive director DeMaurice Smith.

Dungy defended Gruden, saying that he believed this wasn’t a case of Gruden being racist, and tried to move past the criticism.

“We heard Jon Gruden say he addressed this. He gave his side of it. He said that it wasn’t racial, that he was making a comment about DeMaurice Smith, and he basically attacked his character,” Dungy said. “I will accept that and just say that it was an immature way to do it. It wasn’t the right way to do it. But it was 10 years ago. And I’m not going to chalk everything up to racism. I think we accept his apology, move forward, and move on with his team.”

Mike Tirico, who was working the same desk as Dungy, also defended Gruden, whom he used to work with on Monday Night Football.

Dear Lord, please don't ever let me be this goofy @miketirico @TonyDungy pic.twitter.com/Ng6uIkq6GR

“I think if I’m being honest with the audience, I should weigh in a little bit here,” Tirico began. “I was with Jon at that time — seven years as my partner on Monday Night Football. I probably know Jon better than anybody in the league on a personal level. He said it right — he was ashamed by the comments in the email. The comments in the email are wrong.

“But, my experience kind of parallels Tim Brown, who played for Jon. [Brown] said he never experienced or saw anything that would say Jon was racist in any way. That was exactly the experience I had, those seven years of traveling, three days together on the road together every week.”

On Monday, however, we found out that the email in question was just one of many in which Gruden used racist, homophobic, and misogynistic language. He subsequently resigned as head coach of the Las Vegas Raiders and now people are turning back towards Dungy and Tirico to note their quick defense of Gruden.

Dungy has since taken to Twitter to defend himself with a little bit of semantics.

Now more e mails have come. More inappropriate, immature, wrongful attacks on the character of people from all walks of life. I don’t defend those either and given the apparent pattern of behavior the Raiders did the appropriate thing in terminating Jon Gruden.

Dungy and Tirico’s quick defense of their former colleague is a good reminder to perhaps wait until all the facts are out in the open before throwing your own reputation in the ring to defend someone else.