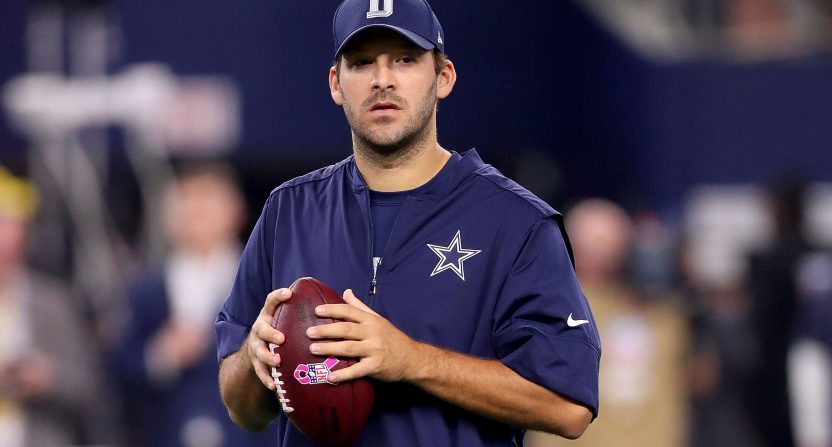 Longtime Dallas Cowboys quarterback Tony Romo announced Tuesday that he will retire from the NFL to pursue a career in broadcasting. Per Sports Business Daily, he will reportedly take over as the No. 1 game analyst on CBS, replacing Phil Simms.

And pretty much as soon as the news dropped, reports and speculation began to pop up about Romo being open to a comeback.

According to ESPN’s Adam Schefter, at least one NFL exec is thinking of the quarterback as a contingency play.

One NFL exec texted now: "Romo is now every teams emergency backup qb in case your starter gets hurt, pay him to come out of "retirement.' "

According to NFL Network’s Jane Slater, Romo is open to returning to the Cowboys if the situation is right.

Source: Tony Romo is "retiring" from football to pursue broadcasting, BUT if Cowboys ever REALLY needed him, he'd consider coming back.

And according to common sense, Romo looks a whole lot like the next Brett Favre, destined to forever tease us with rumors of a comeback.

A Tony Romo return?
"It's not out of the realm of possibility."

The problem with Romo’s retirement is that no one—including the QB himself—really knows if he’s done. The last time Romo played a full season, in 2014, he led the NFL in completion percentage, yards per attempt and ESPN’s QBR and was named to his fourth Pro Bowl. He spent much of the past two seasons injured, but he was pretty good when he actually saw the field.

There was no spot for Romo with the Cowboys, who have turned over the keys to Dak Prescott, but there’s no question another NFL team would have found room for him. And every time a starting quarterback gets hurt next fall, you can guarantee we’ll hear Romo’s name floated as a potential candidate to fill in.

CBS probably wouldn’t have given Romo its top analyst position if he hadn’t offered a firm commitment. But as we’ve learned over the years, people change their minds.

If this is it for Romo, we salute an impressive NFL career and wish him the best of luck in broadcasting.

But all things considered, it’s hard to know for sure if this is actually the end.