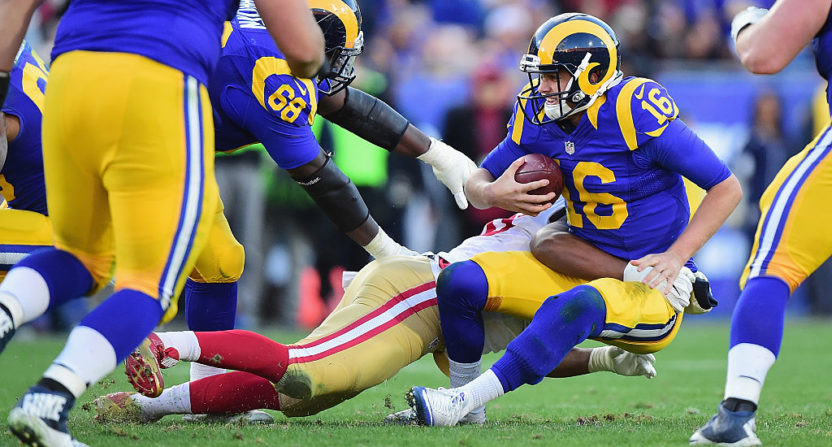 The NFL’s Thursday Night Football offering is far from intriguing tonight, with the Los Angeles Rams visiting the San Francisco 49ers. It is the second straight week the Thursday Night Football game has lacked much sizzle. Somebody has to win, right? Well, not necessarily. And anyone tuning in tonight will likely not come away feeling like a winner after digesting three hours of what could be pure slop served to you on the NFL’s silver spoon.

Here are 10 things you could do Thursday night instead of watching the game:

This is the obvious alternative for the football fan, of course. If only you had a matchup to really look forward to. No. 21 USF may be hosting the defending AAC champions from Temple, but this should be a solid mismatch between the Bulls and Owls. The home team has won by double-digits each of the past two years, and USF is well ahead of where Temple is this season. But you still get to watch Quinton Flowers do his thing while Charlie Strong revives his career in Tampa.

If you are really starving for a football alternative, fire up ESPNU for North Carolina Central vs. South Carolina State in some FCS action.

2. Catch up on some Netflix

I just wrapped up watching Ozark on Netflix and will offer my recommendation (but feel free to skip Episode 8; it’s pointless).

3. Watch the NL Central race between the Cubs and Brewers

Jake Arrieta takes the mound for the defending World Series champions tonight on the road in Milwaukee, as the Cubs look to stay ahead of the second-place Brewers in the NL Central. The Cubs enter tonight with a 3.5-game lead on the Brew Crew. You can catch the game on MLB Network starting at 8:10 p.m. ET.

4. Clean out your refrigerator

You know you have been saving those leftovers a little too long anyway. It’s time, and it will be less foul than the game between the Rams and 49ers.

5. Clean out your DVR

Similar to Netflix, tonight will be a good opportunity to finally watch that recording of Better Call Saul or Homeland you have been saving on your DVR for the last few months when things got busy and you didn’t have the time to sit down and watch without interruption. We’ve all been there, right?

6. Finally beat that video game you got sidetracked on

Personally, I might take some time to pick up my Hylian shield once more and see if I can finally beat Legend of Zelda: Breath of the Wild. Or at least find a few more Koroks.

You won’t believe how much money you are throwing away at the grocery store until you start planning out your shopping and organize some coupons. You don’t have to go full extreme couponing or anything like that, but a little bit here and a little bit there adds up.

You know you do a fair amount of reading during a game anyway between Twitter and Facebook. Why not expand your horizons by cracking open a book this evening? At least for a chapter or two.

9. Say hello to your family

Just because it is football season doesn’t mean your family is non-existent. Say hi to those in your home, or maybe shoot a text to your other family members a bit farther away. They miss you in the fall.

The NFL has you wrapped around its corporate pinky. If it puts NFL on TV, you will watch it like the puppet you refuse to admit you are. But you will also take solace in knowing you are not the only fan out there being played like a fiddle, because a number of fans will take tonight to pursue other activities and errands like the ones listed above, only to later give in and say they’ll just check the score real quick. The next thing you know, you will sit through the halftime analysis and be suckered in for the second half of play.

But at least you tried to be better on this Thursday. You really did try.