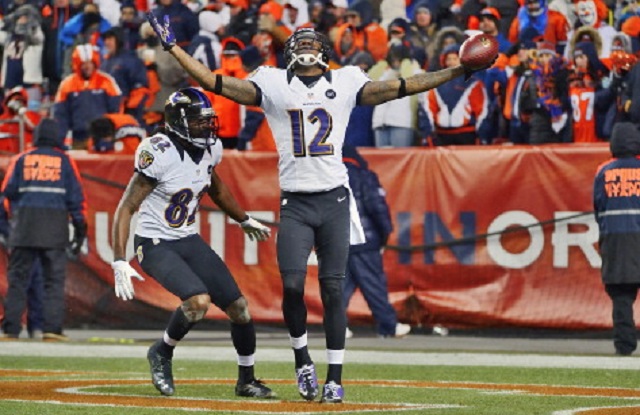 Will this weekend’s NFL Divisional Round playoff games offer anything as exciting as these memorable contests from the past decade?

Seahawks-Falcons. Texans-Patriots. Steelers-Chiefs. Packers-Cowboys. Besides undergoing a heart attack while watching Texans quarterback Brock Osweiler toss a football, the NFL Divisional Round playoff games should provide plenty of intrigue. In fact, each matchup is a rematch from the regular season, with three of the four being blowouts. Expect that to change this weekend.

Over the past decade, just over half of the total affairs in the Divisional Round featured one-score outcomes. Among them, five sent its viewers into a state of delirium. But before enjoying this weekend’s slate of NFL playoff games, let’s take a look back at the five best games that the Divisional Round has offered during the last 10 years.

Any time the normally dreadful Rex Grossman is eligible to be included on a list, how could you deny him? Well, in this duel, the Florida Gators’ product actually played adequately, leading Chicago to a 14-7 edge in the second quarter with a 68-yard scoring bullet to wideout Bernard Berrian.

Nevertheless, the Bears and Seahawks continuously traded shots at Soldier Field, and the underdog Seahawks even took a 24-21 lead midway through the third frame, thanks to former MVP Shaun Alexander’s 13-yard touchdown scamper. Alexander found success against arguably one of the league’s top defenses with 108 yards on the ground (4.2 YPC) and two scores.

Following interceptions via Matt Hasselbeck and Grossman in the fourth quarter, the Bears finally knotted the score on a classic 12-play, 48-yard drive with 4:28 left. Neither unit could capitalize on three separate series to end the period, but Bears wide receiver Rashied Davis supplied the heroics with a 38-yard catch over the middle in overtime to put them in striking distance. Placekicker Robbie Gould would then nail a 49-yard game-winning field goal to send Chicago the NFC title game. Currently, Gould ranks seventh in NFL history in field goal accuracy (85.9 percent).

Despite winning its last playoff game in 1994 (AFC Championship vs. Pittsburgh), San Diego pulled out the upset victory over the Peyton Manning-led powerhouse. Chargers signal caller Philip Rivers helped by delivering the most exciting play of the afternoon, but it came with a hefty fee.

With 10 seconds to go in the third quarter, Rivers dumped off a pass to tailback Darren Sproles, who entered the contest due to LaDanian Tomlinson bruising his knee in the first half. The 5-foot-6, 190-pounder subsequently dashed 56 yards to the end zone (seen at the 9:12 mark of the video above) to hand San Diego a 24-21 lead. However, Rivers also partially tore his MCL on the play, pushing him to the bench.

Enter Billy Volek. After a 55-yard touchdown hookup from Manning to wideout Anthony Gonzalez, the career backup possessed 10-plus minutes to orchestrate his signature moment. He accomplished that on one methodical eight-play, 78-yard drive, which resulted in Volek capping the possession off with a one-yard touchdown plunge of his own. His co-workers responded by forcing the soon-to-be Hall of Fame QB into an incompletion on fourth-and-goal (12:18) to seal the franchise’s monumental win. Now, go have some fun in Los Angeles.

Prior to Colin Kaepernick taking over behind center, Alex “the game manager” Smith rung up San Francisco’s first postseason victory since the Jeff Garcia days. But in order to accomplish that feat, he took part in a thrilling back-and-forth sequence against QB Drew Brees.

With 4:17 to go in the matchup, Brees found Darren Sproles, who signed with the Saints in 2011, for a 44-yard touchdown off another quick route. A tick under two minutes later, though, Smith would answer with a 28-yard touchdown run, taking the snap and immediately bolting down the sideline. Game over, right? Not if you’re the once-dominant Jimmy Graham.

On New Orleans’ next possession, the 6-foot-7, 265-pound tight end reeled in a throw over the middle and bruised his way 66 yards to the end zone, placing the Saints back on top. After their two-point conversion, the 49ers trailed by three points. At that moment, Smith began to erase his game manager label, carrying the team on a seven-play, 88-yard drive. With 14 seconds remaining, Smith riffled a pass to tight end Vernon Davis for a game-winning, 14-yard touchdown. Who says defense wins championships?

Though he didn’t win the game as you might expect, Green Bay’s performance in this affair is memorable because of a superhuman named Aaron Rodgers.

Even though the game was primarily a defensive battle throughout the first three quarters, the California native manufactured two phenomenal throws in the final minute to knot the score at 20 apiece. To start things off, on a fourth-and-20, Rodgers scrambled around dangerously in his own end zone and hit wide receiver Jeff Janis on a 60-yard fling. Two plays later, the two connected again, as Rodgers pinpointed a dart to Janis for a 41-yard touchdown strike, sending the game to overtime. If only the late Jack Buck could’ve called that play.

But on the first play of overtime, veteran wideout Larry Fitzgerald essentially ended the Packers’ upset bid, as he took a busted play 75 yards down the field. Then QB Carson Palmer would shuffle a five-yard touchdown pass to Fitzgerald, ending the matchup without Rodgers getting another opportunity.

When some spectators make the heavily-criticized claim that QB Joe Flacco throws the best deep ball in the league, don’t shoot it down.

Facing a seven-point deficit with 42 seconds remaining, Flacco hung a would-be dagger on Denver’s defense, firing a 70-yard touchdown pass to wide receiver Jacoby Jones. Somehow, the then-five-year starter placed the ball inches over over safety Rahim Moore’s outstretched fingertips for the “Mile High Miracle.” Additionally, Moore seemed to have his eyes on tight end Dennis Pitta, leaving him a step behind Jones.

Deep into the first overtime session, Baltimore safety Corey Graham intercepted Peyton Manning in Broncos’ territory. Minutes later, placekicker Justin Tucker cashed in, ending the contest with a 47-yard field goal. In what went down as another disappointing playoff loss for Manning, the Ravens rode the win all the way to a Super Bowl title.