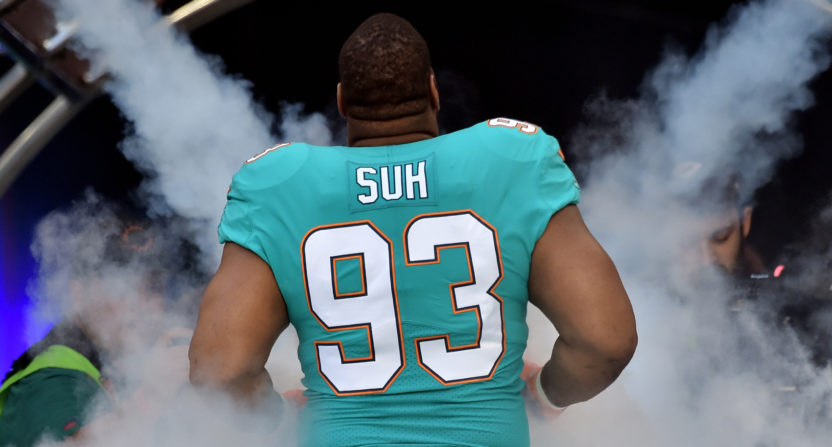 The first wave of NFL free agency is in the history books, and most of the primo players released as the new league year got underway have already been snatched up by poaching teams. That being said, there are still some intriguing players lingering on the open market who could play major roles in the right situation.

Here are the top 10 players still available as the first full week of free agency comes to an end.

1. DT Ndamukong Suh: The 31-year-old has shown signs of aging but still has the ability to dominate inside. Buzz surrounds the Titans, Saints and Rams, all of whom would see their Super Bowl chances increase with Suh in the fold.

2. CB E.J. Gaines: Opposing quarterbacks posted a passer rating of just 75.2 when throwing the 26-year-old’s way in 2017, according to PFF. It’s weird he’s not getting more open-market love at the age of 26, but he reportedly met with the Cardinals last week.

3. WR Allen Hurns: Recently released by the Jaguars, the 26-year-old is two years removed from a 1,031-yard, 10-touchdown campaign. It won’t likely take him long to find work.

4. S Tre Boston: The 25-year-old experienced a breakout campaign with the Chargers, intercepting five passes and recording 79 tackles in his first full season as an NFL starter.

5. LB NaVorro Bowman: A long-term deal might be too risky, but the four-time All-Pro made a huge difference with the Raiders last season. He’s yet to turn 30, somehow.

6. DT Johnathan Hankins: No longer a fit in Indianapolis, the 26-year-old has been a solid starter in each of the last four seasons (three with the Giants, one with the Colts). He could land with the Redskins.

7. S Kenny Vaccaro: The 27-year-old has missed nine games the last two years but has still managed to intercept five passes in that span. He should compete for a starting spot wherever he signs.

8. G Jack Mewhort: The 26-year-old former second-round pick has the ability to become a Pro Bowl-level starter, which was saw glimpses of during an excellent 2015 season. Problem is he hasn’t been able to stay healthy since.

9. DT Bennie Logan: The 28-year-old former third-round selection has been a solid starter throughout his five-year career.

10. S Eric Reid: The talented former first-round pick has missed nine games the last two seasons, but he’s still only 26 and is better than quite a few projected starters. Is he getting the Colin Kaepernick treatment?