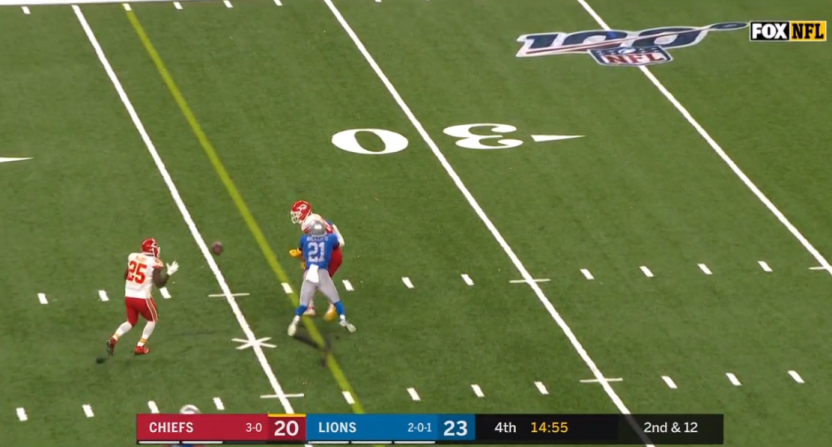 As a kid, one of my favorite things to do when playing football video games was to randomly lateral. It almost never worked, because game physics weren’t (and still aren’t) the best, and there wasn’t really much to the function other than pressing an otherwise little-used button (the left shoulder on the N64 controller, for example) and hoping that something fun would happen.

But I enjoyed doing it because, in my mind, I wanted more laterals in real games. It just seemed to make too much sense! Why not pitch it to a teammate in space if you can for a few extra yards? I hadn’t yet experienced the onset of adult risk-reward analysis that turns too many of us into Jeff Fisher-esque husks of fun-hating, possession valuing drones. (It’s also why I still love college football video games, because the option is essentially a lateral that everyone just agrees is okay.)

Which brings me to this awesome play in the very fun, occasionally sloppy Chiefs-Lions game today in Detroit.

The @Chiefs actually just broke out a surprise hook and ladder 😱#KCvsDET pic.twitter.com/NXPJQHV5sp

Driving in Detroit territory, Patrick Mahomes rolled to his right and then threw back across his body, where both Travis Kelce and LeSean McCoy were in one spot on the field. Kelce took the pass, and immediately flipped it to McCoy, as the only Detroit defender in the area wrapped up Kelce instead. McCoy took it in literal and figurative stride, turning the play into an even bigger gain.

Kansas City scored a touchdown a few plays later, and considering the contest remains close in the fourth quarter, every score is going to matter.