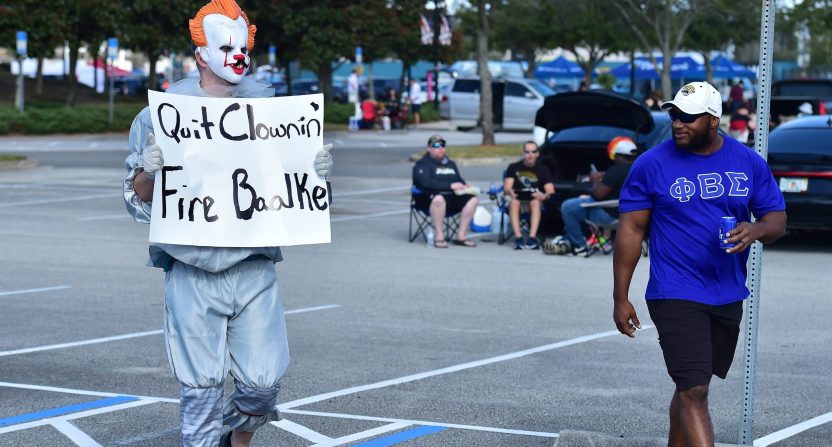 The Jacksonville Jaguars were reportedly very close to hiring Tampa Bay Buccaneers assistant Byron Leftwich as their next head coach. In fact, they still might. However, according to recent reports, Leftwich wants something else to happen first before he takes on the head coaching role.

Source tells me that Byron Leftwich is the #jaguars pick but the hold up is over who will have control of the roster. Leftwich wants Trent Baalke out and the #Jaguars to hire Adrian Wilson who is the Vice President of pro scouting with Cardinals. https://t.co/TBlgdwaMEk

According to reports, Leftwich wants the Jaguars to fire general manager Trent Baalke and replace him with Adrian Wilson, currently the vice president of pro scouting for the Arizona Cardinals. Some have even reported that this is already happening.

Hearing the Jaguars are close to hiring Adrian Wilson as their GM and Byron Leftwich as HC.

However, nothing appears to be certain for sure at the moment and no one has come out and said this definitely happening yet.

For Jaguars fans, it would be welcome news to hear that Baalke is gone. The controversial GM was retained after the team fired Urban Meyer. They also said that he would be involved in the search for their new head coach next year, something that appears to have caused multiple candidates for the job to back away out of a desire not to work with him.

Jaguars fans showed their disdain for Baalke and the team’s decision to keep him by changing their social media avatars to clowns and even showing up to the season finale in full clown gear in protest.

So the idea that Baalke could be pushed out is something they seem very excited about. However, there’s also the possibility the Jaguars decide to back Baalke again and miss out on Leftwich, who is now also a candidate for the Saints job. Those two distinct possibilities have created a lot of distinct reactions from Jacksonville fans on social media.

If Byron Leftwich is able to force Trent Baalke out to hire his own GM, this city won’t wait for a Super Bowl win to hold a parade

I can’t stress enough that keeping Trent Baalke in any capacity is a mistake. It was a mistake last year. People looked past it due to the excitement for Trevor and Urban. Don’t let it happen again, Shad.

If Trent Baalke stays, it's a mistake. If he isn't gonna stay, he should already have been gone. It isn't rocket science. This feels exactly like free agency did last year.

We’ll see how all of this plays out and how Jaguars fans feel in the end. Given the kind of run they’ve had to deal with in recent years, they’re probably assuming the worst while hoping for the best.