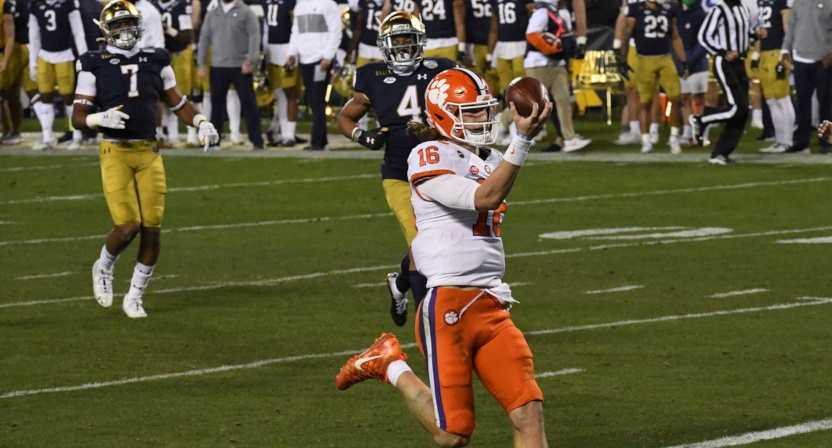 If you’ve been an NFL fan long enough and you’ve paid attention to enough NFL Drafts, you know that the need for a player to prove their “desire” and “motivation” to win is basically a requirement. Even though we’ve watched these players put it all on the line for years in college football and, presumably, deal with injuries or media spotlights in order to perform at the highest levels. These guys obviously know what it means to in their position and they wouldn’t be pushing themselves to be a top pick if they didn’t have plenty of desire and motivation and whatever else comes with that.

We’ve seen multiple instances now headed into the 2020 NFL Draft where a top quarterback prospect’s desire to win and motivation to improve has been questioned. First, it was Ohio State’s Justin Fields, who was the latest Black quarterback to have to hear anonymous quotes about his lack of motivation and perceived lack of desire to work hard. The pushback to those comments was quick and strong, backed up by proof on the field, but nevertheless showed how insidious they can be.

Now it’s Clemson QB Trevor Lawrence’s turn. The man expected to be the No. 1 pick in the 2021 NFL Draft stepped into silly controversy earlier this week when he discussed how he feels about football and its place in his life as part of a Sports Illustrated article published earlier this week.

“It’s not like I need [football] for my life to be O.K. I want to do it because I want to be the best I can be. I want to maximize my potential. Who wouldn’t want to? You kind of waste it if you don’t.”

“It’s hard to explain that because I want people to know that I’m passionate about what I do and it’s really important to me, but … I don’t have this huge chip on my shoulder, that everyone’s out to get me and I’m trying to prove everybody wrong,” he told Sports Illustrated. “I just don’t have that. I can’t manufacture that. I don’t want to.”

To be fair, most of the people you’d expect to start in on Lawrence didn’t really have much of a problem with the comments. Colin Cowherd, Stephen A. Smith, Skip Bayless, and Paul Finebaum all felt like the comments very fair given Lawrence’s on-field success rate and the way he’s proven his ability to win and compete.

That doesn’t mean there was some pushback, of course. But to be fair, even when people did push back, it came couched in the notion that Lawrence remains an obvious top pick.

.@getnickwright reacts to Trevor Lawrence saying, 'I don't have a huge chip on my shoulder':

"I would trade four First Round picks for Trevor Lawrence. … [But] if you're a Jags fan, you kind of do want your QB to be maniacally focused." pic.twitter.com/5NCf2vlS1m

However, Lawrence certainly seemed to hear about it from someone. He still felt the need to respond to critics and those who doubted his commitment to the sport and winning on the field in a series of tweets.

It seems as if people are misreading my sentiment.

I am internally motivated – I love football as much or more than anyone. It is a HUGE priority in my life, obviously. I am driven to be the best I can be, and to maximize my potential. And to WIN. (1/3)

I have a lot of confidence in my work ethic, I love to grind and to chase my goals. You can ask anyone who has been in my life. That being said, I am secure in who I am, and what I believe. I don’t need football to make me feel worthy as a person. I purely love the game and (2/3)

Everything that comes with it. The work, the team, the ups and downs. I am a firm believer in the fact that there is a plan for my life and I’m called to be the best I can be at whatever I am doing.

Thanks for coming to my TedTalk lol. 🙌🏼

Lawrence has been a class act for much of his college career and he continues to do so dealing with the pushback, real or perceived, that he got for those comments. If anything, it seems as though he’s ingratiated himself with media members and draft insiders even more because he’s able to be honest about perspective while also proving his abilities on the field.

It’s just a bummer he felt the need to in the first place. If anything, he hopefully opened the door for more prospects and players to be honest about the way the NFL and football fit into their lives and helps destigmatize the notion that it is, ultimately, just a job.