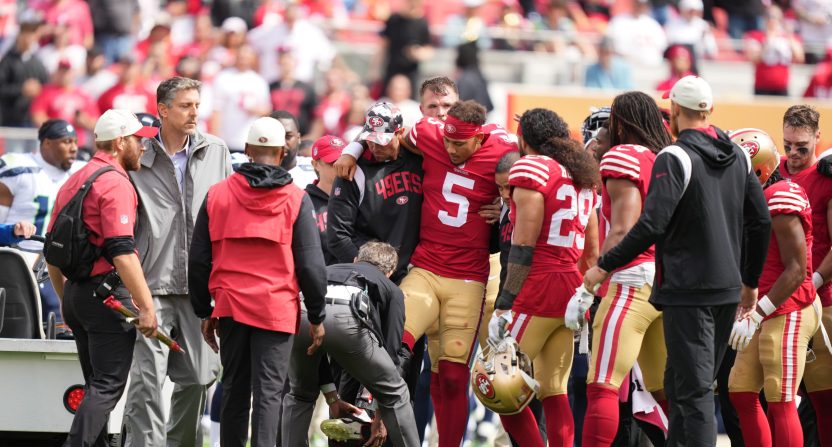 While the San Francisco 49ers defeated the Seattle Seahawks to even their record in Week 2, something of a cloud hung over the game. Jimmy Garoppolo came off the bench to lead the 49ers to that victory due to an injury to starting quarterback Trey Lance. The injury looked bad when it happened, with Lance carted off the field. Following the game, coach Kyle Shanahan confirmed the severity of it.

Minutes after the game, Shanahan announced that Lance had sustained a broken ankle and will undergo surgery on Monday, thus ending his season after only two games.

While the news was expected, the NFL world was still saddened to see it become official.

If you use your QB as if he's your running back….yeah…gonna happen. Lord what a mess. https://t.co/QjzurAWI9M

Hate to see that happen to Trey Lance. I still believe in you, young man. Here's to a speedy recovery.

Lance is in his second NFL season and his first as San Francisco’s full-time starter. His performance in a Week 1 loss to the Chicago Bears came under heavy scrutiny. Before his Week 2 injury, Lance was 2-for-3 with 30 yards passing and added three carries for 13 yards. The 49ers led 3-0 at the time of his injury, though went up 6-0 on the possession where he was hurt and were already in field goal range at the time of his injury.

In his stead, Garoppolo was 13-for-21 for 154 yards passing, adding both a throwing and rushing touchdown in the 27-7 victory.

While the general expectation throughout the offseason was that the 49ers would trade or release Garoppolo, that changed when he signed a new deal shortly before the start of the season.