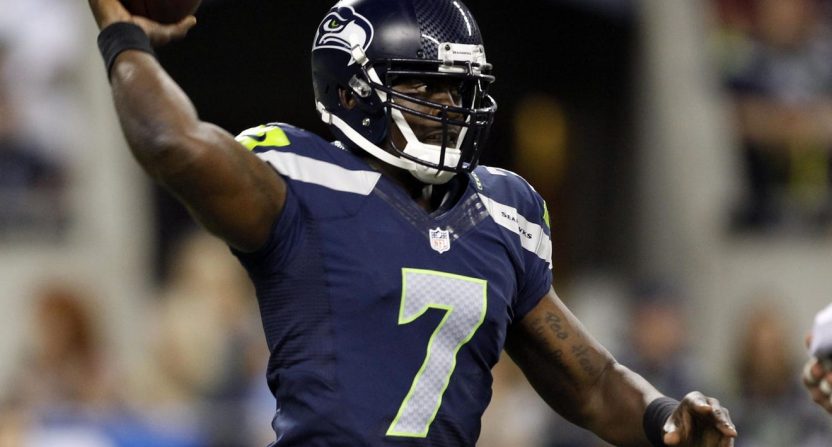 The football world got some sad news as it was revealed that former NFL QB Tarvaris Jackson was killed in a single-car accident in Alabama. TMZ reported that Jackson’s car hit a tree and overturned. Jackson was 36.

Jackson was primarily a backup in his 10-year career, playing for the Minnesota Vikings, Buffalo Bills, and Seattle Seahawks. It was at his first stint with the Seahawks where Jackson had his best season. Starting 15 games in 2011, Jackson threw for 3,091 yards and 14 touchdowns. Jackson won a Super Bowl title in his second Seahawks stint, backing up Russell Wilson at Super Bowl XLVIII.

Tributes for Jackson from people throughout the football community were all over social media including some from his teammates.

TJack… you will be missed. Praying for your family…Love you man. 💔

Once Favre showed up, our relationship got even stronger. It was as if we were both in this odd spot, but figured we’d make the most of it as we watched Favre have his best season ever.
That QB room, run by coach Kevin Rodgers, was a perfect mix of XOs and hilarious stories.

Tarvaris Jackson was my mentor! He played the game with dignity and taught me how to use my MIND 🧠 to manipulate the defense. When my family couldn’t make it to Seattle for holidays, it was TJACK who invited me to his house to celebrate with his family!

Rest in peace, Tarvaris Jackson. He was one of the most universally respected players in the #Seahawks locker room in the 15 years I've been around the team. https://t.co/aQNmcRY0Xq

Tarvaris Jackson was a beloved teammate, competitor, and Seahawk. He will be deeply missed. So heartbroken by the news of his passing and sending our condolences to his family and friends. We love you forever @7tjackson

RIP Tavaris Jackson. TJack was one of the best teammates and friends. Drafted together in 06’ and he will be missed. #skol #tavarisjackson

Played with TJack in ‘08 on the @Vikings He was young and hungry. I can’t believe this happened. Prayers for him and his family during this horrible time. https://t.co/6KaoIp4Kzf

Prayers to the Jackson family. We’ve lost a great kid, competitor, a guy who cared for so many and a leader. So sad to hear about Tarvaris Jackson. You have touched so many and have influenced so many to believe in themselves. Anything is possible. RIP my brother. @7tjackson

Tarvaris Jackson always made it a point to give back to his hometown. These are just a few videos in the @wsfa12news archives where he talked about his drive to give back to Montgomery. Thoughts and prayers to his family and friends. pic.twitter.com/H54OSDFCQo

The Seahawks are stunned and heartbroken to learn of the tragic passing of legend Tarvaris Jackson.

T-Jack earned the respect of the organization and teammates with his competitiveness, toughness and professionalism. Our deepest condolences go out to his family and friends. pic.twitter.com/4YApkKaVnh

Statement from the #Vikings on the passing of former QB Tarvaris Jackson. pic.twitter.com/zcHIPQtMUN