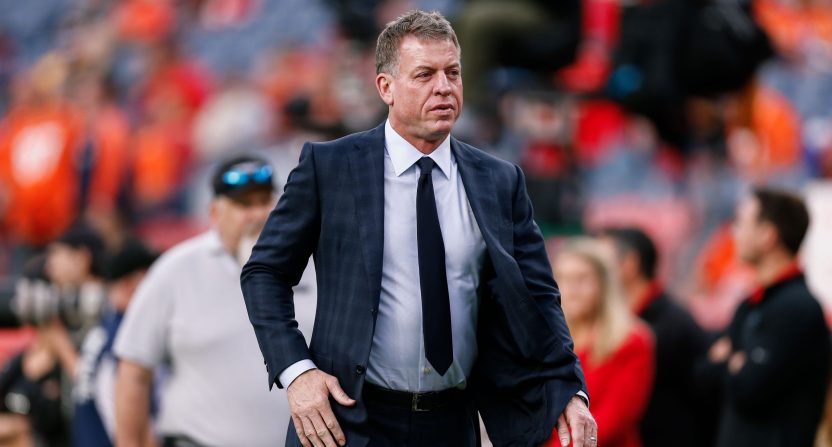 While football fans will still hear the commentary of Troy Aikman in 2022, it may not be on the same network.

It was reported on Wednesday that Aikman is negotiating with ESPN to be the main analyst for Monday Night Football. Aikman’s arrival could bring stability to a booth that has been in a constant state of flux since Jon Gruden left Monday Night Football to coach the then Oakland Raiders following the 2017 season.

The news drew a variety of reactions.

Aikman has been at Fox for more than 20 years, working with Joe Buck for nearly the entire time. Given how long he’s been working with Buck, those two being broken up is going to be an adjustment for some.

Woah. I've been listening to Buck/Aikman on Fox as long as I can remember. End of an era. https://t.co/aUw3mn64ln

First of the dominoes. Really grew to love the Buck/Aikman team. Really did. https://t.co/srRP5aqSRF

Of course, if Aikman is the first domino to fall, there’s a natural follow-up. Who will be the next? If one of the next dominos is Al Michaels returning to Monday Night Football to work with Aikman, that pairing will have some fans.

If ESPN brings in Al Michaels, he and Aikman immediately become the best booth in football – in my opinion https://t.co/oi4JYGjb9m

Give me Al Michaels and Troy Aikman on MNF. That be awesome! https://t.co/HqbMd1bRhW

Al Michaels and Troy Aikman would be an outrageous team for MNF. 10/10.

Regardless of who Aikman is paired with on Mondays, some fans feel that his addition will make the telecast better.

Letting Aikman walk is a huge mistake by FOX. He immediately will make Monday Night Football the best product it's been since Michaels/Madden. https://t.co/ukYIZazqUC

I probably wouldn't have said this as recently as a few years ago, but this is a good get for MNF. I think Aikman has really grown in his analysis and critiques of players/teams in recent seasons. https://t.co/aOrV8St8UM

Troy Aikman is a big get for ESPN/ Monday Night Football https://t.co/o36zQZC6Sh

MNF broadcasts are so awful these days that Troy Aikman is a very clear upgrade over everyone they've put in the analyst role in recent years. https://t.co/ek8Fb939Gf

That isn’t a consensus opinion, of course. While Aikman potentially heading to Monday Night Football has some fans excited, others are far less enthusiastic.

ESPN about to shell out $200 million for Troy Aikman’s once in a generation…mildly pleasant competence? https://t.co/fft0IVx8dj pic.twitter.com/P5gE27YhKf

I watched a lot more NFL the past couple years and one of the things I’ve noticed is how bad Troy Aikman is at his job. Why would ESPN want him? pic.twitter.com/cMbG0xRYkU

You mean I can just watch the Manningcast and not hear Aikman ever again??

Troy Aikman’s playing career ended in 2000. In 2001, he became a broadcaster, working with Fox. When Pat Summerall retired and John Madden went to Monday Night Football, Buck, Aikman, and Cris Collinsworth became Fox’s No. 1 team. Collinsworth left Fox and since then, Buck and Aikman have been the No. 1 team at Fox.

So, regardless of what anyone feels about Aikman or the move to Monday Night Football, it does mark the end of an era in NFL broadcasting.