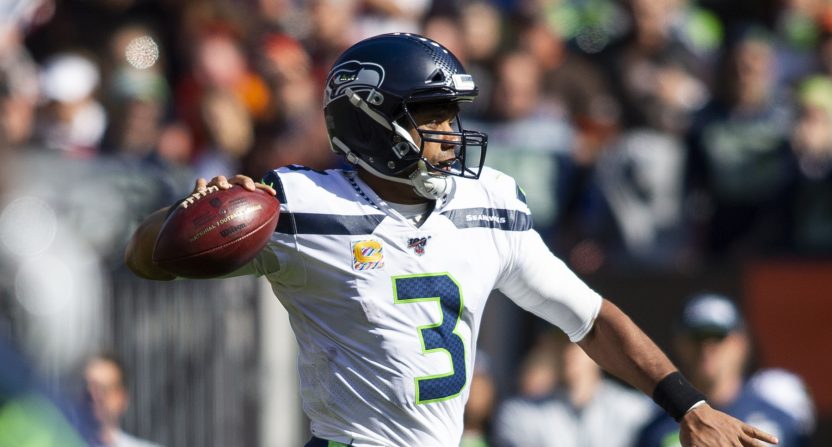 The 2019 NFL season is six weeks old, which has observers drawing some grand conclusions. Which of those conclusions are true and which are false? Let’s roll through ’em.

The Carolina Panthers should move on from Cam Newton: TRUE

Kyle Allen might not be a mega-star, but he’s 5-0 as the team’s starter and has the league’s fifth-highest-rated passer. He’s also yet to throw an interception on 153 career passes. Newton can’t stay healthy and has been awful in each of his last five starts (all losses). He’s on the wrong side of 30 and the Panthers can save $19.1 million by releasing or trading him this offseason. Considering he hasn’t been consistently good since 2015, this should be a no-brainer.

The New England Patriots are overrated because of their schedule: FALSE

What the hell more are the Pats supposed to do with the teams they’re facing? They’ve already won three games by 21-plus points and a fifth by 16 points. They’re just owning the competition in a way that indicates they should still have sizable advantages when the schedule becomes more difficult. Besides, the defending Super Bowl champions should probably get the benefit of the doubt.

The Buffalo Bills are phony: TRUE

They might be 4-1 and the defense might be legit, but the offense is terrible and it appears quarterback Josh Allen has taken a step back in his second season. Like New England, the Bills have played an easy schedule. But in their case they’ve barely survived against the Jets, Bengals, and Titans. It isn’t sustainable, especially in a division with the Pats.

The San Francisco 49ers are the best team in the NFC: FALSE

Love the 49ers, but there should be little doubt that the NFC remains the New Orleans Saints’ conference to lose. It’s just remarkable that they’re 5-1 despite the fact future Hall of Fame quarterback Drew Brees has thrown just 48 passes, and now you wonder if this time off could help the 40-year-old Brees when he returns fresh in a few weeks. The New Orleans defense is for real, and those offensive weapons will keep them in the Super Bowl picture.

The Atlanta Falcons have to fire Dan Quinn: TRUE

The Falcons suffer from Super Bowl LI post-traumatic stress disorder, and that won’t change until they make some serious changes in order to put that 28-3 trauma in the past. The Falcons are far too talented to have lost 10 of their last 14 games overall, and the primary culprit is Quinn’s defense. They’re on track to rank in the bottom-10 defensively for the third time in a four-year span under Quinn’s tutelage, and there’s nobody else to fire now that he’s made himself the defensive coordinator as well.

The league has figured out Patrick Mahomes: FALSE

Mahomes was always likely to regress a bit this season, but his “struggles” have more to do with the fact he keeps aggravating an ankle injury and Tyreek Hill has been hurt. Dude isn’t healthy, and yet he’s the league’s second-highest-rated passer with 14 touchdown passes and one interception in six games. Let’s not overreact to three so-so performances under tough circumstances.

When you look at what Mahomes, Allen, Deshaun Watson, Dak Prescott, Lamar Jackson, and Gardner Minshew have done of late, how could you look at either Winston and Mariota and figure it makes sense to give them long-term contracts worth more than $25 million a year? That’s what it’d cost in this market, but too many entry-level quarterbacks have experienced success. Winston has proven that he’ll never learn with his 10 interceptions in six games, and Mariota has already lost his starting job in Tennessee. Both should be backups somewhere in 2020.

Kirk Cousins has turned over a new leaf: FALSE

Don’t be fooled by two strong performances in a row. Yeah, we’re used to seeing Cousins suck in big games against good teams, but a blind squirrel gets a nut once in a while. We’ve seen him fail in big spots far too many times to view that game against the Eagles as anything other than an aberration. Cousins is a middle-of-the-pack quarterback with a huge range, in that he can be really friggin’ good and really friggin’ bad. We’ll see bad Kirk soon. Watch for him to fall on his face in Detroit in Week 7 and/or in Kansas City in Week 9.

Russell Wilson is running away with the MVP award: TRUE

It’s not even close. The man has yet to throw a pick and he’s tied for the league lead with 17 passing/rushing touchdowns. He’s not overly well supported by a mediocre group of weapons, a so-so offensive line, and an average defense, yet Seattle is 5-1. He’s the league’s best improviser, the league’s best passer under pressure, and the league’s best deep-ball thrower. He’s dominating in what appears to be a special season.

There’s a lot of buzz here because the Panthers continue to win without Newton, and because McCaffrey leads the NFL in touchdowns, rushing yards, and yards from scrimmage. But he’s averaging fewer than 5.0 yards per attempt, and he’s been shut down in two divisional games already. That’s a problem considering that there’s little margin for error at his position. Running backs just don’t make enough of a difference these days.