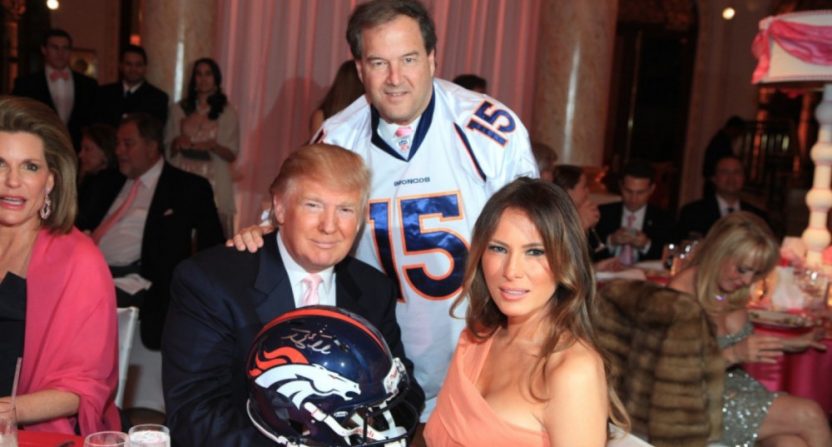 One of the funniest and most sports-applicable aspects of U.S. president Donald Trump’s settlement agreement with New York attorney general Barbara Underwood to wind down the Trump Foundation is that one of the foundation’s three listed non-cash assets (which it must sell as part of this settlement) is a Denver Broncos helmet signed by Tim Tebow. Trump bought that helmet for $12,000 at a Susan G. Komen Foundation charity auction in 2012, using foundation money, but it was listed as one of three assets worth a combined $975 on the foundation’s 2017 IRS filings (PDF).

Honestly, that’s a reasonably fair commentary on how Tebow’s value as a NFL quarterback has changed over time. In early 2012, Tebow was coming off his high-water mark as a NFL player, starting 14 of 15 regular-season games he participated in for the Broncos in 2011 and leading them to an extremely improbable wild-card playoff overtime win over the Pittsburgh Steelers (before they got clocked 45-10 by the New England Patriots in the divisional round). But Denver parted ways with Tebow that offseason to bring in Peyton Manning (who’d lead them to a Super Bowl appearance in 2013 and a title in 2015), and he wound up with the Jets and was mostly used as a fullback/tight end, starting only two games and throwing only eight passes. And while he subsequently had offseason chances with the Patriots (in 2013) and the Philadelphia Eagles (in 2015), 2012 remains the last time Tebow’s made it to a NFL regular season game.

Of course, Tebow has found success in other venues. He’s been an ESPN/SEC Network broadcaster since 2013, and has been able to maintain that career even while pursuing his baseball dreams. And while Tebow hasn’t exactly posted great stats in the minor league ranks, Mets’ general manager Brodie Van Wagenen (Tebow’s former agent) has publicly spoken about starting him in triple-A or perhaps even at the major league level this coming year.

Thus, this isn’t necessary an overall commentary on Tebow. It’s more of a commentary on the value of the Broncos’ helmet he signed that the Trump Foundation bought. In 2012, there might have been a chance of that going up in value; in 2018, it’s listed as worth less than four percent of what they paid for it. That sounds about right.