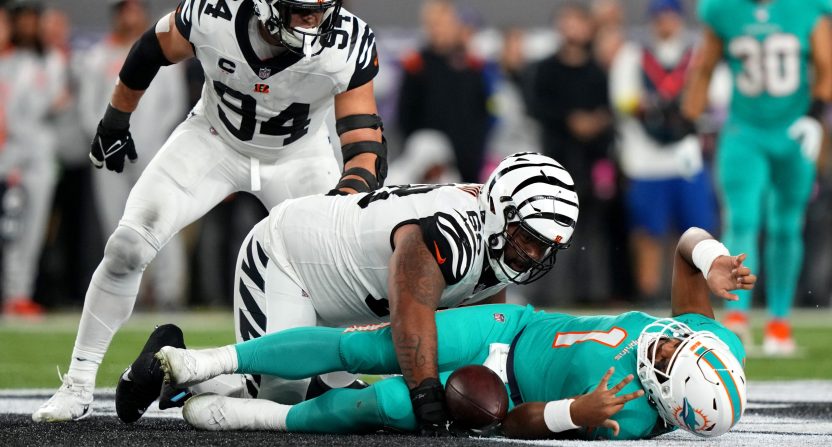 The Miami Dolphins suffered their first loss of the 2022 season on Thursday, falling 27-15 to the Cincinnati Bengals. This game, though, will be remembered less for the final score and more for what happened to Miami quarterback, Tua Tagovailoa.

In Week 3’s win over the Buffalo Bills, Tagovailoa was hit and after getting up, fell to the ground while lightly jogging to the line of scrimmage. He remained in the game. While the NFL insists that the proper protocols were followed, the NFLPA launched an investigation. The already ample concern surrounding Tua’s health was only raised by what happened on Thursday night in Cincinnati.

Late in the first half, Tua was knocked out while being sacked. He left the field on a stretcher and was taken to a hospital. The many replays shown of the frightening hit did the Dolphins no favors in the NFL world.

Former NFL player Chris Long tweeted his support, saying “Pulling for Tua, scary as hell. I hope I’m being overly cynical but I think s**t just got real for the dolphins. This is going to play out loudly.”

He was not the only person to express those feelings. Several NFL players, both past and present, took to Twitter to criticize the Dolphins.

That’s a BAD BADDDD look on the Dolphins man. WTF. I hope Tua is good!

Tua 4 days ago. The Dolphins will have to answer for this. https://t.co/DlNIVMPZmC

As a NFL player and Alumni, I am incredibly disturbed by this TUA situation! NFL, Dolphins whoever it is needs to answer for allowing him back in the game last week after an obvious concussion, lying about his injury being a back injury and then allow him to play tonight 😡 pic.twitter.com/TLHiQyOgKC

That’s a serious injury . Tua shouldn’t have been out there with Sunday Thursday turn around. Sometimes players need protecting from themselves. Dolphins failed Tua

In no sport should an athlete display this kind of neurological behavior and compete again in 4 days (let alone later that day). Someone must be held accountable. #Tua https://t.co/vgVeJX9FUf

Late in the game, it was announced that Tua “is expected to be discharged from the medical center here in Cincinnati, and the team tells me they believe he will be traveling back to Miami with them tonight.”

On the surface, that might seem like good news. But in 2011, Kris Dielman of the then San Diego Chargers sustained a concussion during a game. He attempted to fly home after the game but that had disastrous (and nearly far worse) results.

If you’re unfamiliar, Chargers Pro Bowl OG Kris Dielman tried flying home from NY after suffering a concussion. He had a seizure, they had to do an emergency landing, and he never played again. They’re lucky he lived.

If anything good can come from this, it’s that the NFL might use this incident to further tighten up the concussion protocol so incidents like this don’t happen again.