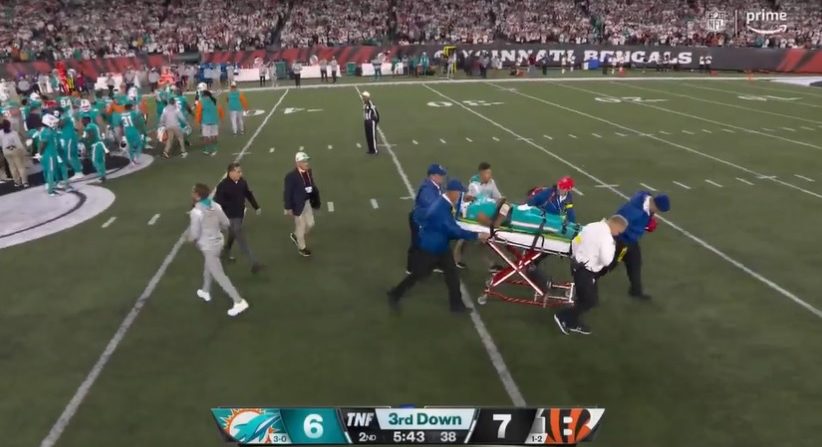 A scary moment occurred in the second quarter of Thursday’s game between the Miami Dolphins and Cincinnati Bengals. Miami quarterback, Tua Tagovailoa was sacked by Cincinnati defensive tackle, Josh Tupou. Tupou’s momentum caused Tua to be slung to the ground, with his back and head hitting the turf hard.

There was a lengthy delay to the game, with Tagovailoa staying down for a long time. Eventually, a stretcher came onto the field and he was taken off.

Miami Dolphins quarterback Tua Tagovailoa has been stretchered off of the field in Cincinnati.

Any injury is bad news but this one is particularly brutal for the NFL. Tua suffered an injury during Week 3’s win over the Buffalo Bills. The way the potential concussion was handled (or not handled) triggered an NFL Players Association investigation, which remained ongoing at the start of Thursday’s game in Cincinnati. The NFL has claimed that the protocols were followed.

In the immediate aftermath of his injury, active and current players, as well as others in the NFL world, tweeted out their support for Tua and wished him well in his upcoming recovery. Other emotions were shared, as well.

Praying Tua is okay & able to continue playing, I’m in the stands so it’s hard to see what actually happened outside of it just being a sack, hate seeing players get injured 🙏🏾

Man.. that was tough to watch.

It was no reason that man should of been in the game. SMH. Protect yourself because some people only see you as a football player.

That looked awful with Tua.

The Dolphins quickly ruled Tua out of the game. They also announced that Tua was taken to a hospital and was “conscious and has movement in all his extremities.”

Injury Update | Tua Tagovailoa is out of the game with head and neck injuries.

Tua Tagovailoa has been taken to a local hospital for further evaluation. He is conscious and has movement in all his extremities.

Tagovailoa was replaced under center by veteran quarterback, Teddy Bridgewater.

At the time of his injury, Tua was 8-for-14 with 110 yards passing with no touchdowns and an interception.