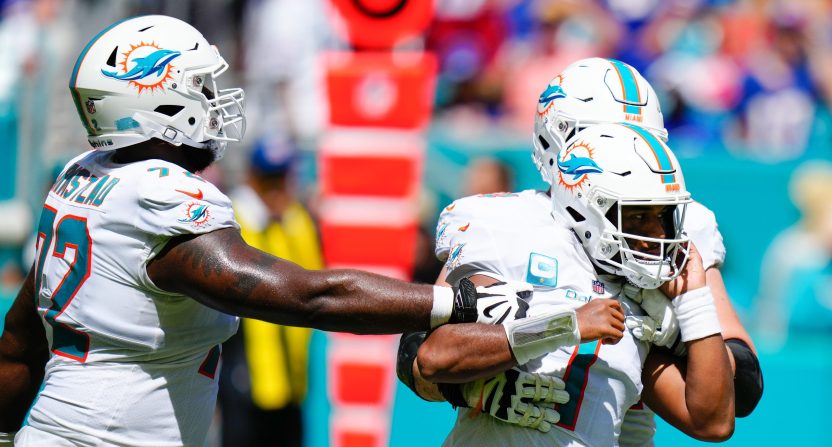 Miami Dolphins fans around the world were stunned to see quarterback Tua Tagovailoa return to the game against the Buffalo Bills Sunday when it had appeared he suffered a concussion.

Tagovailoa was knocked out of the game with minutes to go in the half and it appeared at the time that he would be gone for the rest of the game. The quarterback wobbled to the sideline and was taken back to the locker room before halftime.

This is what happened to Tua Tagovailoa after his head hit the turf hard. Not sure how you let him back in.

But when the second half begin, he was right back on the field, directing his team and stunning the NFL audience watching the game.

Tua’s return was, for the most part, met with surprise and happiness by most fans.

Tua coming back on the field
pic.twitter.com/0COYiEP24o

A lot of NFL fans, however, are questioning the NFL’s concussion protocol that would let Tagovailoa back in the game when it appeared he had no business being on the field after he was unable to leave under his own power.

Tua is back in the Miami game after a noticeably significant concussion. Just throw the concussion protocol out the window, what’s even the point?

I’ve ruptured L5/S1 and had back spasms and never looked like that. I’ve had multiple concussions and looked JUST like that.

But sadly, that man was concussed. https://t.co/pKLE4hIuff

Wait a second, how in the hell is Tua back in this game. He literally collapsed to the ground after getting up from his head slamming on the turf.

The Dolphins aren’t the only ones dealing with injuries. The Bills have had several players leaving the game having to deal with heat exhaustion. Meanwhile, although Tagovailoa has returned to the game, you can notice he is not as crisp as he was in the first half.