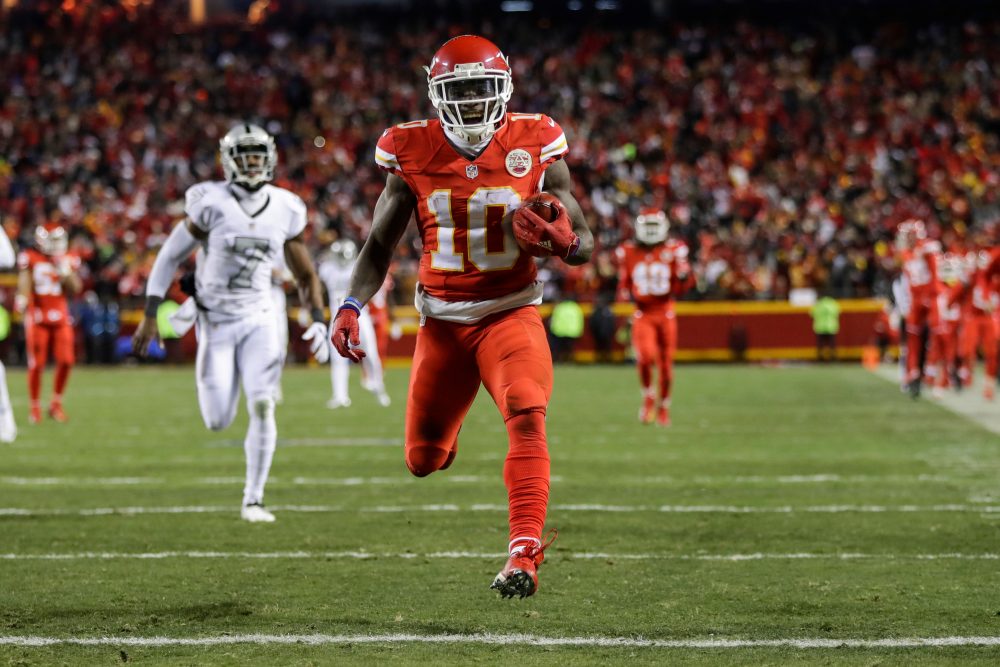 In his short NFL career so far, Tyreek Hill has cemented his place as the Kansas City Chiefs standout wide receiver and one of the top playmakers in the league. That’s not what he’s become known for, however, and the evidence against him just got a lot more damning.

Hill’s legal issues started in 2014 when he was arrested for assaulting his then-pregnant girlfriend, Crystal Espinal. According to the police report, they got into an argument when Hill threw her around, punched her in the face, choked her, sat on her, and punched her multiple times in the stomach. Hill was dismissed from the Oklahoma State football team over the incident. He pled guilty and was sentenced to three years of probation and forced to undergo domestic-abuse evaluation. Espinal gave birth to a baby boy.

Things went quiet on that front until mid-March when news broke that police reports were filed over two incidents at Hill’s home, one for battery and one for child abuse and neglect. Both incidents involved Hill’s son, who had a broken arm (It should also be noted that Espinal is currently pregnant with twins).  On Wednesday, a criminal investigation into Hill and Espinal over the incidents was closed with no files charged. While the DA made it clear that he felt a crime had been committed against a child, he did not think there was enough to bring charges.

That may change now that KCTV5 obtained a recording of Hill and Espinal discussing the police investigation. According to KCTV5, the recording was an “insurance policy” for Crystal Espinal if charges were not filed against Hill.

Espinal sent it to at least one friend for safekeeping because she didn’t feel she could keep a recording on her phone. It has since been shared and sent to us by someone who is concerned about the welfare of the couple’s child.

The 11-minute recording includes the parents discussing what they’re telling police about the investigation. Hill denies hurting his son but Espinal is heard arguing that she has been covered for Hill. Both parents accuse each other of using a belt on their son.

Crystal: "(law enforcement) said … literally (our son) kept saying, ‘Daddy punches me.’ Which you do, when he starts crying. Which you do. You make him open up his arms and you punch him in the chest. And then if he gets in trouble, you get the belt out"

The most disturbing aspect of the recording was something their three-year-old son said and the ensuing reaction by Hill.

“Daddy did it,” the boy’s mother, Crystal Espinal, could be heard saying, paraphrasing the boy. “He is terrified of you.”

Hill responded, according to the recording: “You need to be terrified of me, too, b—-.”

KCTV5 also reported that the parents have lost custody of their son as a result of a separate Child Protective Services investigation through the Kansas Department of Children and Families. Hill also has a “no contact” order with his son. The child is living with a non-relative family he is familiar with.

As for what happens now it’s unclear, especially given how poorly the NFL has handled these kinds of incidents in the past. Right before the audio went public, Roger Goodell was asked about the investigation into Hill. He gave the kind of condescending answer you’d expect from him at this point.

Sam Ponder asked Roger Goodell about the Tyreek Hill investigation before the new audio was published during the draft countdown show pic.twitter.com/rPdRqXCble

Meanwhile, the Chiefs are withholding any comment at the moment as the NFL Draft gets underway.

Chiefs executive says team has no immediate comment on Tyreek Hill audio but expected to update.

Every day that Hill remains on the Chiefs roster, in spite of his accolades and abilities, will be an indictment of them and the league in the eyes of many people. And while you are innocent until proven guilty, there’s plenty of circumstantial evidence right here, with Hill bragging about his fiance and child should fear him, to send even the most self-serving employer running.

The sentence in the audio from @KCTV5 that will likely doom Tyreek Hill's future with the Chiefs & the NFL is this one that he said to Crystal Espinal:

"You need to be terrified of me, too, bitch."

Says they will gather more info.

"We will make the right decision regarding Tyreek Hill."