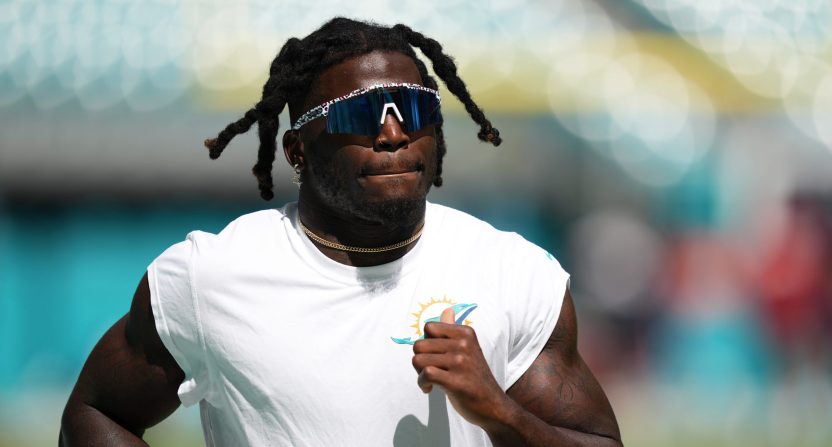 With a new head coach and star wide receiver Tyreek Hill gushing over Tua Tagovailoa all offseason, the Miami Dolphins are bringing a renewed sense of hope to South Beach for the first time in more than a decade.

The Fins got off to a great start in Week 1 — thumping the New England Patriots 20-7. Following the victory over their AFC East rivals, Hill praised coach, Mike McDaniel for his aggressive playstyle in his head coaching debut  — in a way only he can.

Here’s the quote (with video) from Tyreek Hill on Mike McDaniel going for it on 4th and 7: “McDaniel’s gonna need a wheel barrow for his nuts to carry them around.” pic.twitter.com/WcepqVugRn

The play that Hill was referring to occurred when McDaniel had to make a tough fourth down decision late in the first half.

With only a few seconds left on the clock, the Dolphins could haveve easily punted the ball and taken a 10-0 halftime lead. Instead, McDaniel decided to go for it — resulting in a 42-yard touchdown pass to Jaylen Waddle to put Miami up 17-0.

Hill’s remarks had fans on Twitter comparing the rookie coach to Randy Marsh, a character on the popular TV Show South Park. Others have gotten tired of the All-Pro’s antics.

This game showed
A) with the Hill-Waddle combo plus that defense, Miami is gonna be a problem
B) unless something dramatic changes, Tua is holding this team back

Tua lived up to some of Hill’s outrageous expectations, going 23-for-33 for 270 yards and one touchdown. Hill also had quite an outing as well, catching eights balls for 94 yards in his first game with the Dolphins.

If Tagovailoa is able to take a step forward in his third NFL season, the Dolphins could turn into a potential sleeper pick in the AFC.