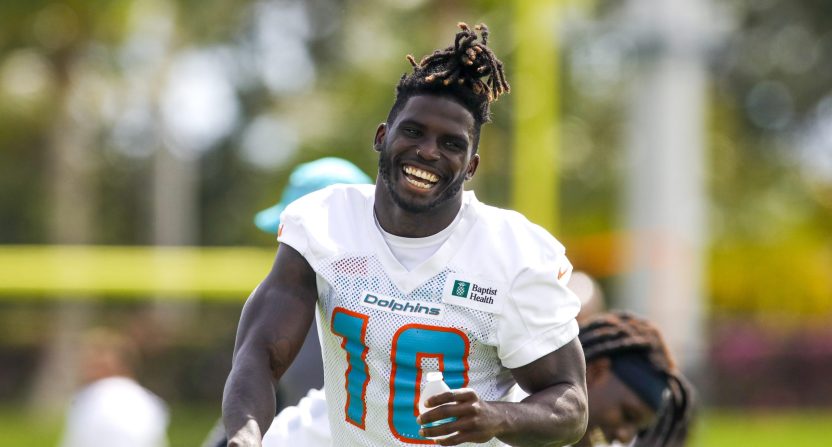 New Miami Dolphins wide receiver Tyreek Hill made waves with recent comments about how his new quarterback compares to his old quarterback. With that drama settled, he remains excited to prove that he and Tua Tagovailoa will put up big numbers together.

Hill, who was traded from the Kansas City Chiefs during the offseason, sparked a lot of comments when he hyped up Tua’s accuracy, going as far as to say that, “accuracy-wise,” he’s taking Tagovailoa over Patrick Mahomes “all day.”

“Obviously, like, I’m gonna go with 15 (Mahomes) as the strongest arm, but as far as accuracy-wise, I’m going with Tua all day,” said Hill on his podcast last month. “I’ve had a chance to see Tua throw the ball, to myself, but… he’s that dude, bro. Like, what a lot of people don’t know, like, I’m not just sitting just saying this because he’s my quarterback now… like, I’m not trying to get more targets right now, but what I’m trying to say is Tua is that deal, bro… Bro, he has a heck of an arm, bro. He’s accurate. He can throw the deep ball, and he actually goes through his reads, where people are like on Twitter like saying, ‘Oh, he doesn’t go through his reads.’ Man, this dude is that dude.”

Mahomes said he was “surprised” to hear those comments but also understood that Hill was just speaking up for his current quarterback and teammate, who has faced a lot of criticism in his short NFL career.

Hill, meanwhile, says he received death threats because of his comments, which is an absurd overreaction by anyone. It’s fine to be offended by the comparison but there’s a line.

Still, Tyreek remains undeterred in his defense of his new QB and the two sat down to discuss their burgeoning relationship on the latest episode of Hill’s podcast.

Tagovailoa says it was “crazy” to learn that Hill had been traded to Miami and that Hill “sets the standard for the receiver room entirely” and the chemistry currently growing between the two of them. Hill agreed.

“It’s all good, man,” Hill said. “It’s all good. I just feel that our chemistry will get there. Look, it’s going to be about 2 a.m. one night and you’re gonna wake up and walk in your kitchen and I’m going to be washing your dishes. That’s how good our chemistry is going to be. You’re gonna be like, ‘Reek, what are you doing in here?” I’m trying to get that chemistry and that bond together so you know where I’m at all the time, on the field. So, if a run a 60-yard route and decide to just turn it into a comeback, I just need the ball right there. Our chemistry is going to be on point, just believe that.”

It’s going to be a huge year for Tua, Tyreek, and the Fins. If their chemistry can translate to a playoff berth,