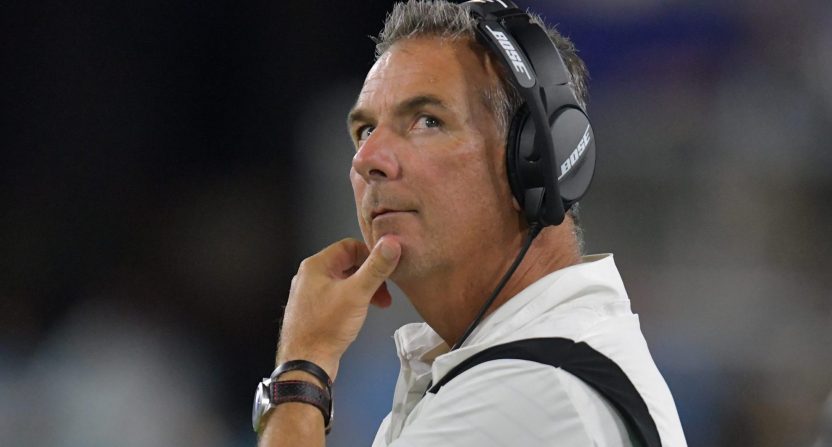 It would be easy for Urban Meyer to quit. He could pack his bags and leave today. Just like Nick Saban, Steve Spurrier, and Bobby Petrino. Just another failed football coach with an impressive college résumé who couldn’t hack it in the NFL.

And just like those guys, he could return to the familiarity of a school campus. An environment where he doesn’t have to worry about the draft, salary cap, or free agency. He can simply out-recruit the competition to build another national championship team. An environment where he can exert more control over the players and the media. Few would stand up to him.

Or perhaps he will ease back in retirement while occasionally opining as a television analyst. Either way, Meyer is a rich man with options. The American dream.

Whatever happens next, it might be Meyer’s call. He wasn’t going to be fired this week. No matter how loudly Marcus Spears yells. Not in a league where Robert Kraft exists. (Go ahead, Google “New England Patriots” and “Orchids of Asia Day Spa” for all the tawdry details). Condemn Meyer’s behavior all you want. It didn’t violate the league policy.

Sure, the optics were awful – the coach of an 0-4 team mixing it up with a young woman who is not his wife. His half-truths were laughable. There is something profoundly sad about a 57-year-old man’s cover story unraveling over social media.

However, none of this is a fireable offense. A key difference between the NFL and college is that you answer to one person. There are no influential boosters to convince. There are no recruits you need to woo. Jacksonville Jaguars owner Shahid Khan has the only opinion that matters. Yes, even more than his skeptical players.

THREAD 1) The Urban Meyer situation in Jacksonville has reached a crisis point, especially in the locker room. One player told me, 'He has zero credibility in that stadium. He had very little to begin with.'

Khan released a statement calling Meyer’s behavior “inexcusable” and that his coach must “regain our trust and respect.” Khan may not trust, respect, or even like his coach. But he needs Meyer to succeed. To oust Meyer would be admitting to making another mistake.

Powerful businesspeople are accustomed to occasional unfavorable publicity. Khan knew exactly who he was bringing in to run his team and he wants a return on that investment. Heck, Khan stuck with Doug Marrone through three straight horrific seasons and Gus Bradley for four bad years. That’s patience.

In college, Meyer was a coaching hired gun. He won a lot of games, but you also winced at his methods and conduct. No one, including his current boss, should be surprised at his behavior.

Unless something cataclysmic happens, Meyer will remain in charge of the Jaguars. But does Meyer want to stay for the long haul? A legitimate question. He must be miserable at being 0-4. Tim Tebow, who played quarterback at Florida for Meyer and was with the Jaguars this preseason while trying to make a comeback as a tight end, gave voice to that.

“He is taking that hard. But I also think that this dude is super resolute and super determined,” said Tebow, who won a championship at Florida. “I think he’ll continue to tweak and mold and change and get new guys in there and adapt and do whatever it takes because he’s so determined. I don’t think he’d quit without finding a way to turn the tide a little bit.”

When you have a public relations nightmare, you need to change the narrative. Jacksonville’s best strategy is to start winning. The franchise is stuck in a 19-game losing streak, the second-longest in the Super Bowl era. The Jaguars are trying to avoid the record of 26 in a row, set by the expansion Tampa Bay Buccaneers of the 1970s.

Jacksonville, despite being one of two winless teams remaining in the 2021 NFL season, has shown signs of progress. The Jaguars might have beaten Cincinnati last week if not for a failed fourth-and-goal play while up 14-0 in the first half. They lost, 24-21.

This season isn’t really about wins and losses. This season is all about developing Trevor Lawrence. After a shaky start, Lawrence started to look like the No. 1 overall pick against the Bengals. He made plays with his arm and his legs that few quarterbacks can make.

Lawrence is the reason why Meyer is in Jacksonville. If the Jaguars didn’t secure the top pick, Meyer might still be working in TV. It takes time for quarterbacks to grow in the NFL. Justin Herbert, who enjoyed the greatest QB debut we’ve ever seen last year, is an outlier. Rookie passers are supposed to struggle.

Saban failed with the Miami Dolphins because he couldn’t find a franchise quarterback. The same with Spurrier and the Washington Football Team. Petrino quit midseason of his first year with the Atlanta Falcon because he lost Michael Vick due to a dogfighting scandal.

Trevor Lawrence throws a 50-yarder on the run 💪

Meyer has an advantage that none of his predecessors enjoyed. The luxury of a young, talented quarterback. He is nurturing the most hyped quarterback prospect since Andrew Luck. Lawrence is the best argument for Meyer to stay. He will regret it forever if Lawrence becomes a generational star under another coach. It usually takes about 32 starts to evaluate a quarterback. That means Meyer should remain at least through the 2022 season.

Will that happen? Who knows.

Jacksonville has a young roster and probably will have another high draft pick next year. Meyer can mold the Jaguars into something special. Look at the rest of the division. The Houston Texans are bad with their own dysfunction. The Indianapolis Colts have brittle Carson Wentz. And the Tennessee Titans’ Ryan Tannehill might have already enjoyed his best years.

The future could be bright if Meyer sticks with Jacksonville. In the end, there are more reasons to stay than leave. He can coach his way out of this mess.

If he wants to.