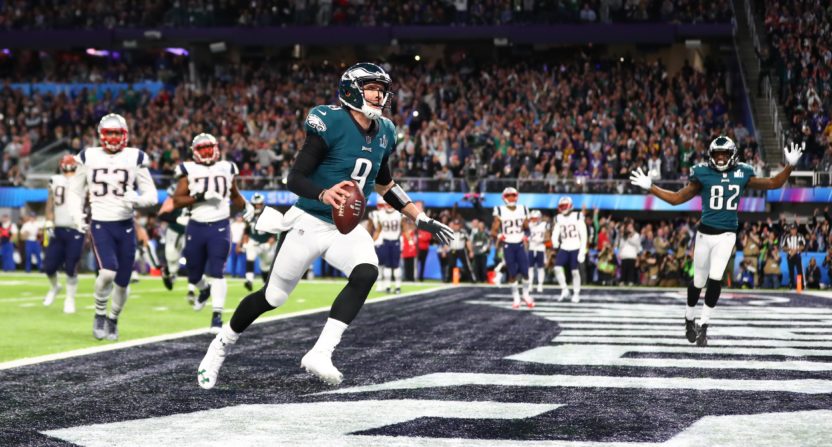 Oh, to be Nick Foles right now. Among the unlikeliest of Super Bowl MVPs, Foles suddenly finds himself in an enviable position, if not one of the unique positions sports has to offer.

Despite his newfound fame as Super Bowl MVP, Foles is destined to be the Philadelphia Eagles’ backup quarterback once franchise quarterback Carson Wentz returns. That makes this offseason one worth watching for Foles. It’s an intriguing situation off the field, as well.

For instance, as The Baltimore Sun‘s Jeff Barker points out, Under Armour is trying to figure out exactly what to do with Foles, with whom they have an endorsement deal through next season. A previously under-the-radar client is suddenly a big name, striking gold for the apparel company.

But is that worth making a long-term deal with Foles? That’s the dilemma now facing Under Armour. Keeping him in the fold should be a no-brainer, right? Yet what if he’s a backup again, as expected? How much should he be paid, Super Bowl MVP notwithstanding?

Under Armour still has Foles under contract for a year, so a decision doesn’t have to be made right away. And the company would be wise to see how things play out before making a future commitment.

Foles has plenty to offer Under Armour with his story, going from considering retirement to stepping in as a backup to lead the Eagles to a Super Bowl win against the vaunted New England Patriots. It’s a story that could be made into a movie one day, and Under Armour is well aware of that. But again, how much is that worth for the company?

Given his temperament and approach to life, Foles will likely be OK with not being paid what Under Armour would typically pay an elite athlete. But if he has an opportunity to be paid handsomely, of course Foles would prefer that. If he’s traded and gets a starting job elsewhere, how will that impact his stock?

Waiting seems like the best play for both sides here. But who really holds the cards here? For now, it’s Under Armour. If Foles had taken over a desperate team, turned its season around and won a championship, he would be the unquestioned starter and this would be an entirely different situation.

Obviously, that’s not the case. Wentz was having a MVP-caliber season before tearing his ACL and assuming he returns to full health, he’ll be the starter in Philadelphia.

Under Armour may love the Foles story, but if he’s not a franchise player, they can’t sell a top-line sneaker with him.

Foles’s future may be shaky with national endorsements, but he’ll probably enjoy a lifetime of endorsement deals in and around the City of Brotherly Love. Leading the Eagles to their first Super Bowl title has already cemented Foles’s legacy in Philadelphia. Ask guys like Dick Vermeil and Vince Papale (whose story was made into the movie Invincible) how that goes.

That might not be the same as a major deal with a company like Under Armour or Nike (who has Carson Wentz under contract, by the way), but it’s better than nothing.