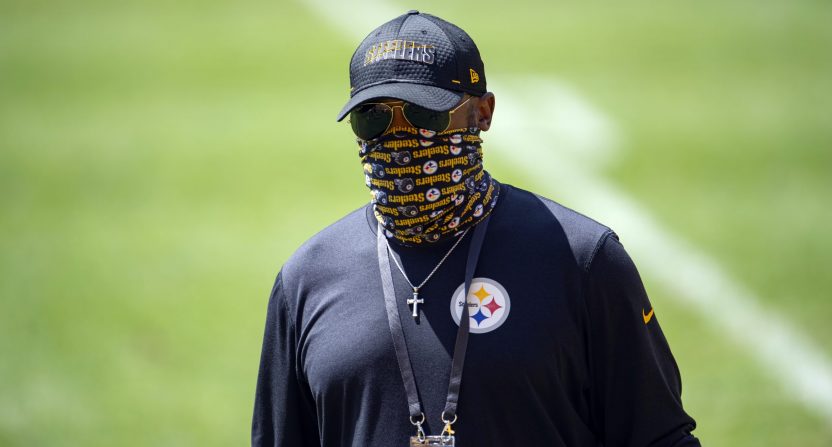 The biggest problem with quick success? When you win early and often, people expect that to be the norm. This brings us to Mike Tomlin.

Pittsburgh Steelers fans love waxing poetically about their team. Their next favorite activity might be complaining about Tomlin. Few successful NFL coaches have been underappreciated more. But these days you rarely hear a chirp. The Steelers (11-1) were the league’s last unbeaten team before being upset by the Washington Football Team on Monday.

Despite the loss, they remain in position for the No. 1 playoff seed in the AFC over the defending Super Bowl champion Kansas City Chiefs (11-1) based on in-conference record. With the expanded postseason format, this will be more important than ever. Only the top-seed will receive a first-round bye.

No one predicted that these Steelers would get off to the greatest start in the franchise history. Credit Tomlin, who’s third among active coaches in winning percentage (.657) and victories (144). He’s never had a losing season. Tomlin won a Super Bowl in his second year at the age of 36, the youngest ever to accomplish that feat. He almost won a second Super Bowl by his fourth season, but was thwarted by the Green Bay Packers.

That success and stability should be applauded. But instead, following consecutive seasons without a playoff appearance and three straight years without a postseason victory, Tomlin has endured plenty of criticism. Some justified. Some not.

It’s completely reasonable to be frustrated. The Steelers are tradition-rich, winning six Super Bowls. They have high standards. The Steelers probably should’ve made a Super Bowl trip when they had the Killer Bs of Ben Roethlisberger, Le’Veon Bell, and Antonio Brown in their primes. During that 2013-2017 window, Pittsburgh reached the AFC title game once.

But the Steelers organization takes pride in supporting their coaches. They hire qualified people and stick with them. The Rooney Family, who have owned the Steelers over eight decades, hasn’t fired a coach since 1968. That’s incredible given the impatient sports climate.

You’d think more Steelers fans would rejoice in that stability. And yet…

Tomlin is still fighting for respect.

There was a report that some limited partners of the franchise wanted Tomlin fired after the team was upset by Jacksonville in the playoffs three years ago. In fall 2018, Steelers Hall of Fame quarterback Terry Bradshaw unloaded on Tomlin calling him a “great cheerleader guy,” not “a great coach.” And in one ugly incident, a Pennsylvania fire chief used a racial slur while lashing out at Tomlin on Facebook.

That’s particularly offensive since Tomlin is the face of minority success in the NFL. In a league where 70 percent of the players are black, Tomlin is one of just three current African American head coaches.

The league hasn’t put enough minorities in charge. The Rooney Rule, the league mandate that owners must interview at least one minority candidate for upper management positions, has been mostly a failure.

But when it was first implemented in 2003, it played a role in Pittsburgh hiring Tomlin who then was a little-known defensive coordinator for the Minnesota Vikings. He was so impressive during the process that the Rooneys chose Tomlin over Steelers assistant Russ Grim and Bears defensive coordinator Ron Rivera. All of a sudden, a minority landed one of the best jobs in all of sports.

Since then, Tomlin has excelled. Yes, he’s not Bill Belichick. No one is. But compare with other contemporaries. As great as Andy Reid is, it took him 21 years to win a Super Bowl. Tomlin has a better winning percentage than Reid, Sean Payton, Pete Carroll, John Harbaugh, and Mike McCarthy. All those guys have also won a Super Bowl.

Tomlin did one of his finest coaching jobs last year. The Steelers were in the playoff hunt despite a season-ending arm injury to Roethlisberger. With Roethlisberger back this season, Pittsburgh has the best scoring differential in the NFL (+123).

The defense has been fantastic, relying on a fierce pass rush and the ability to create turnovers. They’ve allowed a league-low 17.6 points per game. But they lost defensive end Bud Dupree (knee). Without Dupree on the other side, that might make it easier for opponents to double team T.J. Watt (12 sacks), a Defensive Player of the Year candidate.

The offense is different. We’re used to Roethlisberger holding on to the football for a long time and firing deep. He’s now getting the ball out faster than he ever has before. Quick throws and the occasionally deep shots, especially rookie wideout Chase Claypool. But the receivers have struggled. They dropped eight passes against Washington and have dropped an NFL-worst 31.

The Steelers aren’t a perfect team, but they don’t have to be. The pandemic has made it an odd season. Pittsburgh has as good a chance as any to win the Super Bowl. Maybe then, Steelers fans will appreciate Tomlin a little more.