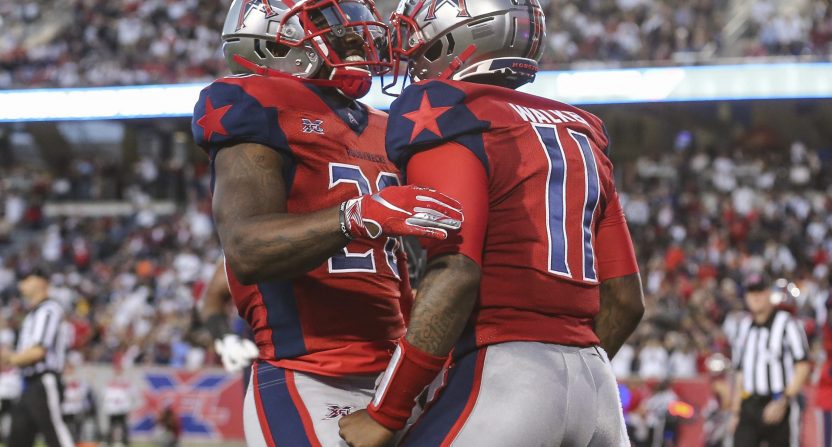 Anytime someone proposes a new sporting event, they take note at how much money will be brought into the city and to the facility itself. Usually, the “economic impact” is rather exaggerated and while there is an impact, it’s not usually as advertised. However, when it comes to the University of Houston, they are reportedly having better than expected results due to the XFL.

According to Front Office Sport, the University of Houston is using the revenue brought on from the XFL’s presence to make upgrades to their sports facilities, namely TDECU Stadium. The XFL chose Houston for their league-wide training camp location and the Houston Roughnecks play their home games on campus and that has brought in $7 million in revenue just for the training camp. Replacing the turf and adding WiFi were two notable enhancements to the stadium, with WiFi being something the XFL installed.

The first bit of additional benefit came soon after camp in the form of facility enhancements when the XFL helped the university fund a new field at TDECU. Replacing the turf had been a project on the school’s to-do list, but wouldn’t have been completed for two or three more years until other capital projects were prioritized, athletic director Chris Pezman said.

With the fledgling league splitting the cost, the project was tackled within a matter of days.

The gridiron wasn’t the only area to get a boost. The XFL also put WiFi in the lower bowl of the stadium to enhance the fan experience and support the venue’s in-seat concession service.

The article digs deeper into Houston’s agreement with the XFL. On top of rent, the University gets a piece of parking, food, and merchandising revenue, as well as half of the online fees on ticket sales (which if it’s anything like Ticketmaster’s fees, it’s a lot). The XFL gets the entire cut of the ticket sale before fees with Houston having over 17k fans for both home games so far this season.

According to athletic director Chris Pezman, Houston’s special event revenue stream was around $200k per year before this year and now with XFL games, that number has climbed to a “conservative” $1.5 million, and might possibly be more when they host the XFL Championship this April.

Clearly the XFL has long term plans, given the five year rental agreement and the XFL willing to upgrade the facilities they’re renting out. Every stadium is looking to maximize their revenue streams and are looking for a variety of events to host. Among the eight XFL stadiums, four are current or former NFL stadiums, two are MLS stadiums (counting Seattle as NFL and LA as MLS due to seating capacity), one is an MLB stadium, and one is a college football stadium. Whether it’s from concerts or other sports, everyone’s looking for something so they can limit the number of empty days of the stadium. For the University of Houston, that’s having the XFL and it looks like that’s paying off in its early weeks.