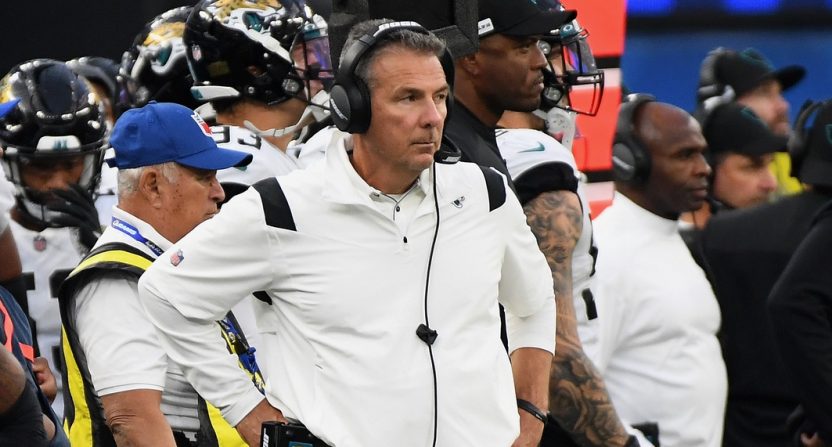 While the Jacksonville Jaguars weren’t expected to be world-beaters this season, the hope was that Urban Meyer would inject something into the franchise to get them back on track. But before the season started, there were rumors of discontent. And things only got worse from there.

Meyer’s viral video incident, which happened when he skipped the flight back to Florida, only seemed to build a rift between him and the rest of the team. Even owner Shad Khan had to publicly smack him on the nose. There were rumors of resigning but it was presumed he’d keep his job, at least for now. The Jags won a couple of games but have since slid backward, leaving their coach looking miserable on the sidelines. Rumors ran rampant again over Notre Dame and, while he denied it, he also admitted he didn’t expect to be 2-9.

He’s been rumored to be back on the hot seat and that was before the Jaguars got smothered by the Los Angeles Rams this weekend, 37-7.

After the game, Meyer was asked if he had any answers to stop Jacksonville’s new losing streak.

“I wish I had all the answers, and I’d give them to you. I don’t know the answers other than I know this, that you’re going to keep swinging and keep working together,” Meyer said. Is there a confidence issue? Any time you’re not successful, that’s something we’ve got to fight through. Confidence is a result of success, and right now we’re struggling with that.”

A rebuild like the one in Jacksonville is something that’s going to take time, effort, and discipline. It remains unclear if Meyer will stick around long enough to see it through, but in the meantime, his comments certainly earned a reaction amongst NFL folks on social media.

So, we just gonna do this same ish for another 3-4 years, @Jaguars?

Urban Meyer just needs a recruiting class of his own players along with more time to implement his system.

You could consider quitting https://t.co/ZaaAsr3Ysc

Its unlikely things will get too much better for Meyer and the Jaguars in the weeks ahead. They have to take on the 8-4 Tennessee Titans this weekend following their own bye week. However, they do have back-to-back games against Houston Texans and New York Jets, the two AFC teams in as bad a shape as Jacksonville is. If there was ever an opportunity to find some answers, it’ll be in that stretch.