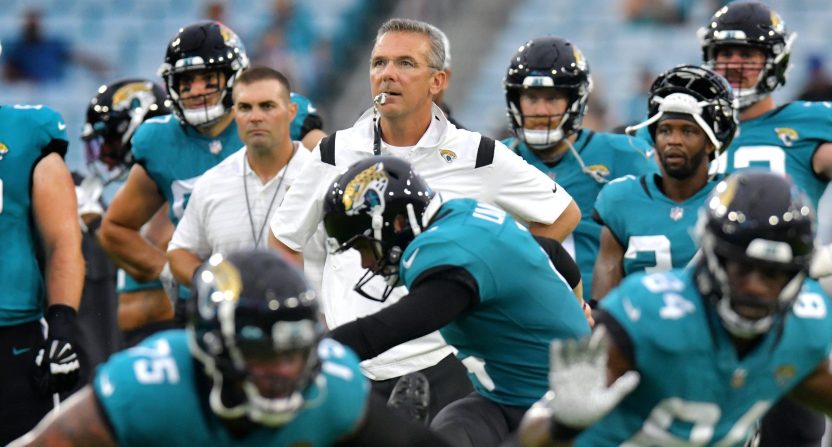 While Urban Meyer has mostly stayed out of the spotlight since he was fired by the Jacksonville Jaguars after just 13 games, the longtime head coach stopped by OutKick’s Don’t @ Me with Dan Dakich on Monday to set the record straight on at least one thing.

While his NFL coaching stint will be remembered for many incidents, rumors, and reports, one of the most notable was the allegation by former Jaguars kicker Josh Lambo that Meyer had kicked him while he was stretching during practice.

“I’m in a lunge position,” said Lambo in his interview with the Tampa Bay Times. “Left leg forward, right leg back. Urban Meyer, while I’m in that stretch position, comes up to me and says, ‘Hey, Dips***, make your f***ing kicks!’ And kicks me in the leg.”

“It certainly wasn’t as hard as he could’ve done it, but it certainly wasn’t a love tap. Truthfully, I’d register it as a five (out of 10). Which, in the workplace, I don’t care if it’s football or not, the boss can’t strike an employee. And for a second, I couldn’t believe it actually happened. Pardon my vulgarity, I said, ‘Don’t you ever f***ing kick me again!’ And his response was, “I’m the ball coach, I’ll kick you whenever the f*** I want.”

Meyer denied the incident at the time but the cumulative damage of all the reports and issues off the field, coupled with the disastrous results on the field, led to his firing just a few days later.

During his appearance on Monday, Meyer admitted that he’d made mistakes while with the Jaguars but continued to refute the notion that he had ever kicked Lambo.

“You know when you come out and say there was a player kicked… That's not true. That’s not true at all.” – @CoachUrbanMeyer@dandakich talks to #UrbanMeyer on what it means to push as a coach in 2021, taking responsibility, and owning what you DID, and DID NOT do! pic.twitter.com/VXNBQGifvX

“You know when you come out and say there was a player kicked… That’s not true. That’s not true at all,” said Meyer. “You know, there’s of course accountability and hard conversations and all that…but I do take ownership in the fact that how you go about pushing, it’s 2022, or 2021, but…own it.”

“I certainly did not,” Meyer said. “To say I didn’t tap him with my foot… To kick someone? Come on. I’ve done this 37 years. Kick a player? The other players came up to me and said, ‘We saw the whole thing.’ Because I’d mostly forgotten about it.”

We only have the word of Lambo and Meyer to go on for the incident, though it does seem strange that Meyer would say players came up to him to say they “saw the whole thing” even if, in his words, nothing happened. What did they see, then?

The discussion came up as part of a nearly one-hour discussion between Meyer and Dakich, in which the coach admitted that ” we should have done better. I’m not ashamed to say that” and he described the season as the “worst experience I’ve had in my professional lifetime.”

“It eats away at your soul,” he added. “I tried to train myself to say it happens in the NFL.”