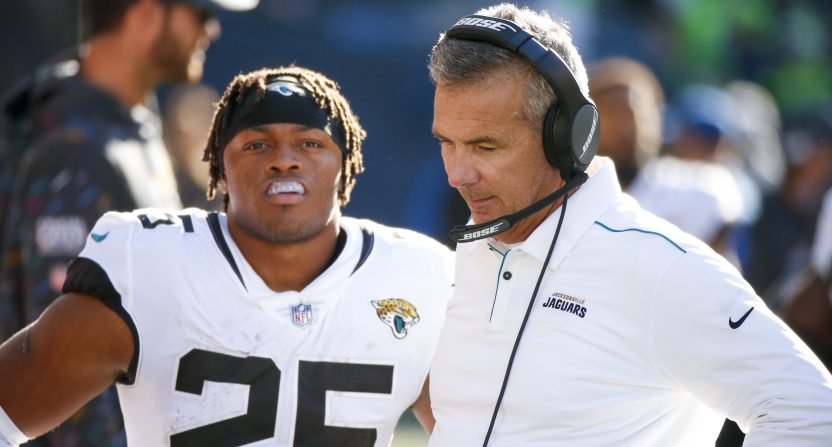 One of the few bright spots for the Jacksonville Jaguars heading into the 2021 NFL season was supposed to be running back James Robinson. After finishing his rookie season with 1,070 rushing yards and 10 total touchdowns, he was expected to be a focal point for the offense while rookie Trevor Lawrence figured things out.

However, Robinson has spent an inordinate amount of time on the bench this season and that situation came to a head this past Sunday when he carried the ball just eight times for 24 yards in a 37-7 loss to the Los Angeles Rams.

Afterward, head coach Urban Meyer was asked about why Robinson was essentially benched following a first-quarter fumble and Meyer told reporters that his absence was due more to an injury than anything. He also made it clear that, had he been healthy, Robinson would have been out on the field.

Jaguars coach Urban Meyer said RB James Robinson sitting out 20 plays after his fumble was not a benching but rather because he's battling an injury. I asked Meyer if Robinson would have been on the field next drive after his fumble if he weren't hurt and Meyer said: "Oh, sure."

However, that’s not what Robinson said, however. The second-year running back told reporters appeared on Jags Report Live and said he was benched after fumbling.

“When [a fumble] happens and you’re out for that long, you’ve gotta feel that way,” Robinson said. “I was just waiting my turn to get back in the game and it didn’t really come until the third quarter.”

Robinson added that he felt there were times when fellow running back Carlos Hyde needed rest but he was stopped by Jaguars coaches from going back onto the field.

Meyer was then asked why, if he thought Robinson was injured, would he allow the running back to re-enter the game in the fourth quarter during a blowout loss. “That’s a good question,” he responded.

I asked Urban Meyer about that today and his response was: "That's a good question." Meyer said there's a RB rotation and RB coach Bernie Parmalee must have wanted to get Robinson a few more carries at that point. When I said that didn't seem wise Meyer said: "I'd agree." https://t.co/T7gTmEb3GO

Robinson was confused by that as well.

“I knew the game was over by that point,” Robinson said on Jags Report Live. “I probably should’ve been resting. I’m not sure what the point of that was.”

"You’d have to ask [Offensive Coordinator Darrell Bevell] Bev and [Running Backs Coach] Bernie [Parmalee] on that one." https://t.co/EhNRb2UPDT

Meyer pointed out that RB coach Bernie Parmalee controls who enters the game and who doesn’t and reiterated that he doesn’t micromanage. But given the confusion involving one of your top playmakers, he might want to get a little bit more involved. Because as bad as things have gotten for Jacksonville, they can always get worse if no one wants to play for you.