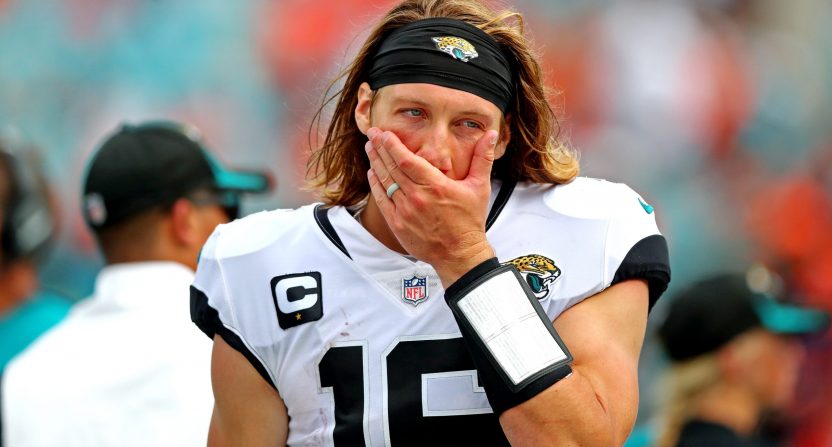 Things are not going great for the Jacksonville Jaguars so far this NFL season. Of course, that was to be expected, but the reality of knowing the Jags are probably going to struggle for the entire year is a tough one for any fanbase to swallow.

After getting obliterated by the lowly Houston Texans in the first week of the season, the Jaguars dropped their second game to the Denver Broncos on Sunday. At 0-2 and not looking like things will improve too much, many fans are already wondering if the mercurial Urban Meyer will leave town sooner than later for the more comfortable confines of college football.

For his part, Meyer is trying to make it clear that he’s here for the long haul. And following the loss on Sunday, he tried to soothe concerns by asking Jacksonville fans to “hang in there with us” in the form of a tweet from the team account.

A message for #DUUUVAL pic.twitter.com/fmB3RGRexX

“Hang in there with us. We’re going to get better,” Meyer said. “The one thing about Jacksonville and the 904, go to sleep knowing there’s not going to be any group working harder to get this thing flipped.”

While it’s a nice sentiment, NFL fans aren’t known for being the most patient or the easiest to calm down when the team seems to be headed in the wrong direction. And rather than make people feel better, that tweet mostly just gave them a chance to make more jokes about the Jags.

Wow. Thought Urban Meyer was going to give up on the Jaguars? Think again after this statement. What a message. pic.twitter.com/7geP0yAvwK

Got the black lives matter unity template out after an 0-2 start https://t.co/iW2IrDG8Ob

Jaguars saying “hang in there” to a fan base that’s seen one winning season since 2008 lmao https://t.co/EDgDepj6Qv

If there’s anyone that Jaguars fans can actually rally around, it’s probably Trevor Lawrence. The rookie quarterback is considered to be the hope of the franchise and is expected to become the central figure in their potential rise out of the NFL basement. Lawrence was asked about the rough start to the season and he shared some honest and relatable thoughts.

“I think I’m processing it as good as I can,” Lawrence said. “You want to win. You work all week to win and when you don’t, it’s disappointing. But I feel like I’m in a good spot. I’m the same person, the same mindset. Nothing’s changed. Making sure I keep my confidence every week is big, and I think I have that so we’re going to get better. We’re close. Last week and this week doesn’t look that great when you look at the numbers, but we just have to make a few more plays and stick together.”

Whether you’re motivated by tweets with platitudes or mature quotes from your quarterback, Jaguars fans have a few options for trying to feel better about their situation. But if neither of those works, well, we don’t have much else for you right now…