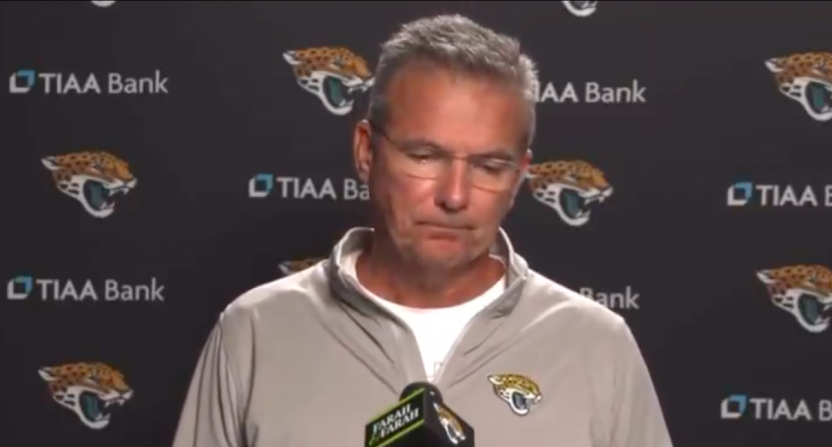 Urban Meyer went viral over the weekend for all the wrong reasons. Videos and photos showing the Jacksonville Jaguars coach getting cozy with a young woman in a bar spread like wildfire across Twitter and brought forth the kind of schadenfreude only reserved for the kind of people everyone is rooting against.

Given how badly the season has been going for Meyer so far, it felt like this was some kind of turning point towards his eventual move away from the team and the NFL as so many people expect.

Monday, Meyer held his usual press conference but needed to clear the air about what happened. Looking about as miserable as you might expect, Meyer explained the events surrounding the videos and apologized for being a “distraction.”

“I just apologized to the team and staff for being a distraction. It was stupid. So I explained everything that happened and owned it.

“I stayed to see the grandkids and we all went to dinner that night at the restaurant. There was a big group next to our restaurant. They wanted me to come over and take pictures and I did. They’re trying to pull me out on the dance floor, screwing around, and I should have left.”

Meyer’s explanation is entirely possible but still a little confusing. Shelley Meyer tweeted that night that she was elsewhere with the grandkids while Meyer was out. She even included the hashtag #BuddyDeservedANightOut, which implies Meyer was going out on his own that evening.

It’s entirely possible that Meyer did go out to dinner with his wife and then stayed out to “take pictures” but considering there are so many photos and videos of Meyer sitting and mingling with others, it certainly appears like his explanation is a little bit tamer than the actual plan for the evening. Was it all just a dumb misunderstanding, as Meyer put it? Or was this a night of “blowing off steam” that got away from him?

Given his apology, a lot of NFL fans might be ready to move on from all this. But we’ll see if any new developments (including photos or videos) appear to clarify the story. In the meantime, we’re guessing Meyer is hoping this all goes away so he can get back to trying to win a football game.