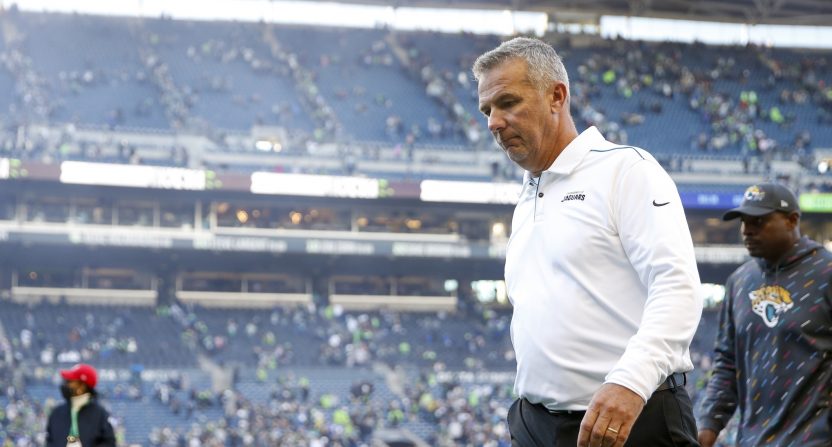 NFL owners are bad at hiring coaches. Truly terrible. For the second time in less than a year, Shahid Khan has fired a Jacksonville Jaguars coach. The fact that Urban Meyer didn’t even last a season is an epic failure of leadership. Khan has no one to blame but himself. He gambled with a splashy move only to have it embarrassingly flop.

Humiliation must be tough for NFL owners. Unless you inherit a franchise, most of them had to be extraordinarily successful business people to have a team. Because they have been rewarded with wealth and power, owners have supreme confidence in themselves when it comes to decision-making. Now imagine their conviction being eroded in such a public forum like professional sports.

That would drive anyone bonkers.

Khan thought the Urban Meyer risk was worth it. He made the most attention-grabbing hire of last off-season. The national media would have to pay attention to his Jaguars. Meyer is arguably the second-most successful college football coach of the modern era with three NCAA championships over two schools (two titles at Florida and one at Ohio State).

Yes, college coaches don’t have a great track record of success in the pros, but surely this would be different. Nick Saban didn’t work out in the NFL because he couldn’t find a quarterback. Jacksonville owned the No. 1 overall pick so it could draft Trevor Lawrence, who was the most highly regarded quarterback prospect since Andrew Luck.

From Khan’s point of view, a Meyer-Lawrence marriage was too good to fail.

Well, it did. Spectacularly. Meyer tried to run an NFL team as if he were a dictator with unquestioned power. Can’t do that in the pros. He made a litany of well-documented mistakes leading to last week’s dismissal. The question that needs to be asked now is: what lessons can owners learn from Jacksonville’s mess?

"It'll be an interesting day at work."

Trevor Lawrence found out Urban Meyer had been fired the same time as most of us: this morning, when he woke up. pic.twitter.com/Rm5txtuaQN

Seven coaches were fired in 2020. Five the year before. Next month, including Meyer and Jon Gruden (who resigned under pressure), as many as eight could be gone by Black Monday. Over the past decade, NFL owners have become less patient and less successful at making good hires. They want results and they want them quickly, often ignoring the fact that the top franchises are the most stable ones, such as the New England Patriots, the Pittsburgh Steelers, the Baltimore Ravens, and the Kansas City Chiefs.

The Patriots have had Bill Belichick in charge for two decades and the Steelers haven’t fired a coach since 1968. A turnover in coaching or the front office usually leads to a change in philosophy. That means all the players you drafted or signed to fit one system of offense or defense might not be relevant to the current management.

But if you do decide to switch coaches, the top lesson learned from the Urban Meyer fiasco is to bring aboard someone with NFL experience. That doesn’t mean you should immediately discount a college coach. But that college coach should have some familiarity with the pros. For example, the jury’s still out on Carolina Panthers’ coach Matt Rhule and Arizona’s Kliff Kingsbury. But before Rhule was the head coach at Baylor, he was a New York Giants assistant. And Kingsbury was a journeyman backup quarterback for multiple NFL teams before he was in charge at Texas Tech.

Rhule and Kingsbury understand that you can’t treat professionals like college kids.

The most successful examples are Pete Carroll and Jim Harbaugh. Carroll was an NFL coach before he went to USC and then later won a Super Bowl with the Seattle Seahawks. Harbaugh, a former NFL quarterback, went to Stanford and then the San Francisco 49ers, where he led them to a Super Bowl. He’s now back in college at Michigan.

Meyer didn’t fully grasp what he was walking into. You want someone who does.

There is no sure-fire formula for finding the right coach. All you can do is make informed choices. As great as Belichick is, his assistants have been unremarkable as head coaches. Andy Reid has a fantastic coaching tree. Two of his former assistants have won Super Bowls (John Harbaugh and Doug Pederson), and a third went to a Super Bowl (Ron Rivera). But the last guy with Reid ties is Matt Nagy, who will likely be fired by the Chicago Bears at the end of the season.

The most obvious Jacksonville candidate out there is Byron Leftwich. The Tampa Bay Buccaneers’ offensive coordinator is a former Jaguar. Normally if you’re Tom Brady’s offensive coordinator, you get head coaching jobs (Josh McDaniels and Bill O’Brien). If Khan would rather have an experienced candidate, Jim Caldwell is a solid albeit unspectacular choice.

The bottom line: Khan and other NFL owners need to think long and hard about what will be the ideal choice for their franchise. This is no one-size-fits all approach. There are different ways to win football games. And sometimes the splashy hire isn’t necessarily the best choice. Belichick and Mike Tomlin weren’t popular when they were hired. Belichick was a loser with the Cleveland Browns, and Tomlin had no head coaching experience.

Khan has another shot to get the right coach. He needs to do a lot of homework and show a lot of patience.