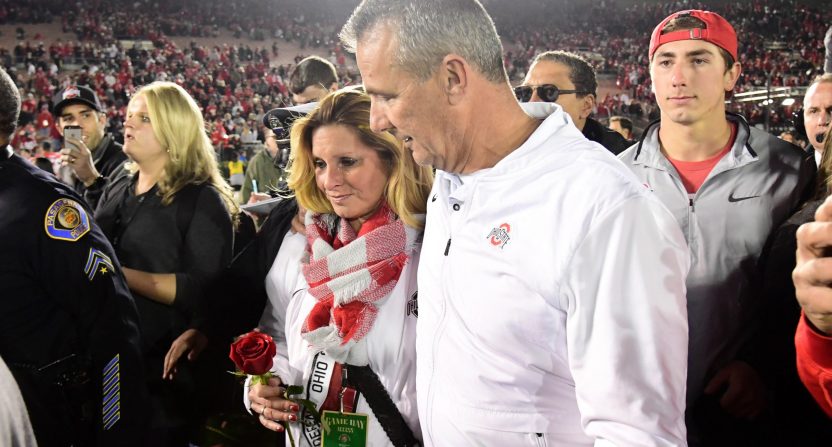 However bright Urban Meyer expected the spotlight to be on him when he took the job as head coach of the Jacksonville Jaguars, it probably feels even brighter at the moment. That’s especially true because his high-profile status and controversial stature don’t just invite interest in what he says and does but also onto his family.

Urban had to contend with rumors of discontent during the offseason, strong reactions to Jacksonville’s first game of the season, and speculations about how long he’ll stick around. His lack of availability has been called into question, asking fans to “hang in there” was met with derision, and even an off-hand admission about how tough the NFL is can become news.

One interesting tidbit that has been glossed over in recent weeks was the fact that Meyer admitted that he considered COVID vaccination status when he made cuts during the off-season.

“Everyone was considered,” Meyer said. “That was part of the [considerations such as] production, let’s start talking about this, and also is he vaccinated or not? Can I say that that was a decision-maker? It was certainly in consideration.”

That led to an NFLPA investigation to see if Meyer was overstepping a boundary. League rules prohibit teams from using vaccination status to inform their employment decisions.

Those comments became even more curious on Wednesday when the Twitterfeed of Shelley Meyer, Urban’s wife, gained attention for her anti-vaccine takes.

If it wasn’t for the Jacksonville Jaguars, Shelley “know stuff” Meyer, would still be teaching at @osunursing. Many thanks and best of luck with all that. pic.twitter.com/4BP6sVeN71

As Comeback Media’s Ben Koo notes, Meyer is a registered nurse with a teaching position at Ohio State’s medical school.

Some might say that it’s none of our business what Shelley Meyer thinks of the COVID vaccine and it has no bearing on Urban or the Jaguars. However, as Slate contributor Alex Kirschner reminds us, Urban has included her in his dealing with the Jaguars as a kind of counselor and discipline guru.

In case anyone wonders why it's relevant that Shelley Meyer is COVID truthering or whatever, it's because Urban has gone out of his way to make her a big part of football administration. Can add it to your Urban Meyer People Management Genius binder https://t.co/qwqXWsxi71 pic.twitter.com/dwXlAnJ981

As you can imagine, there have been some interesting reactions from the media world to these tweets.

Ohio State had Shelley Meyer instructing medicine and Urban Meyer teaching character class. This is all I care to know about Big Ten academics

Shelley Meyer’s Twitter feed during the entirety of COVID has been … it’s been something. https://t.co/tYlcRXhL4k

It’s worth noting that this isn’t new information. Meyer’s stance on vaccines has been well-documented for a while on Twitter. It’s hard to believe the NFL won’t want to get involved at some point, especially given her involvement with the Jaguars.

Someone who was a high level exec at the NFL told me there was “no way” the NFL was not going to address Shelley Meyer tweeting covid misinformation now that Urban was coaching in the NFL. After a series of bad publicity this week for the Meyers, Shelley is still doing her thing. pic.twitter.com/SGoXByWsK3