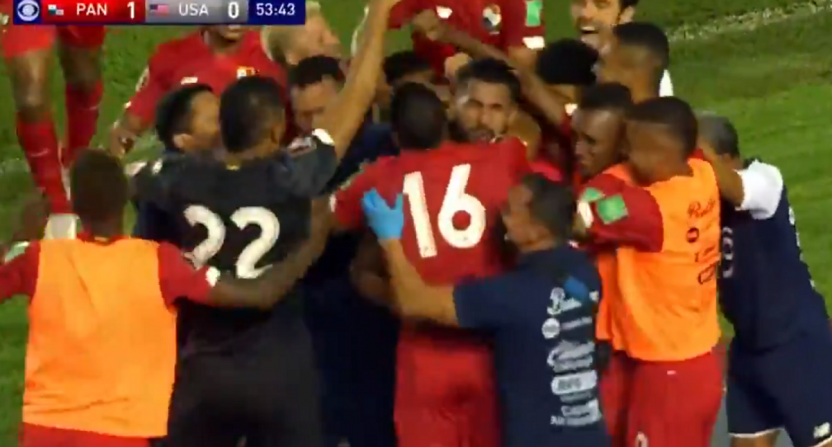 Fans of the United States men’s national team have been told by many that it’s not time to panic yet despite some shaky displays during CONCACAF World Cup qualifying.

The results haven’t been horrible, although they haven’t been good, either. The real issues have been with how the team has looked for long stretches. On Wednesday, for example, the Americans beat Jamaica 2-0 at home. But that came after a scoreless first half that saw Jamaica threatening as much or more.

But Ricardo Pepi saved Gregg Berhalter’s squad thanks to two clinical finishes, and the narrative could be spun positively heading into a road trip to Panama.

In Panama, though, things went very, very wrong. Berhalter’s team looked, well, bad. Panama ended up looking like the much better team, threatening throughout the first half and drawing a big save from Matt Turner to close the first half.

Big save from Matt Turner 👊 pic.twitter.com/UBBCONk5G3

In the second half, Panama scored from a corner thanks to a Gyasi Zardes header.

Panama take the lead over the USMNT 😳 pic.twitter.com/tMsgTaqXTI

The Americans never responded despite Gregg Berhalter making plenty of changes searching for a spark. The whole thing did not inspire any confidence.

I'm a Detroit Lions fan and that USMNT performance was the most depressing thing I saw today.

On 4th anniversary of US elimination from World Cup 2018 qualifying, they lose 1-0 in Panama. No need to panic but last 2 wins masked much about this young US team with inexperienced coach. Warning shot against complacency. Wednesday night gives chance to show lessons learned 🇺🇸 pic.twitter.com/zj0O1iGxIH

The 1st time Panama has ever beaten the USA in World Cup qualifying.

Flat, uninspired and overall terrible performance by the Americans.

The Octagonal is going to be a roller coaster

So how much should American fans worry? Well, it’s not time for all-out panic. Berhalter isn’t going to be fired before Wednesday’s home game against Costa Rica. The Americans still sit second in the final round of qualifying, after all. But they’re now tied with Panama, only second on goal-difference, and they’re only two points away from the drop zone. The USMNT hadn’t lost yet in the round, but that certainly didn’t tell the whole story; draws to El Salvador and Canada to start the round have set the tone so far.

There are a lot of matches remaining, yes, which means there’s time to turn things around. But the Americans have not played their toughest tests yet; there are still home and away matches against Mexico, a road match at Canada, and two matches against Costa Rica.

It’s a long process, but as we learned when they failed to qualify on the last day ahead of the 2018 World Cup, every point matters. It’s hard to look at the schedule so far and say the USMNT has come close to doing what they should be doing, given their available talent (even with some of their top players in and out of lineups.)

They just look lost too often, and at a certain point, it’s going to hurt them. That happened today. If it keeps happening, things could get very dicey.