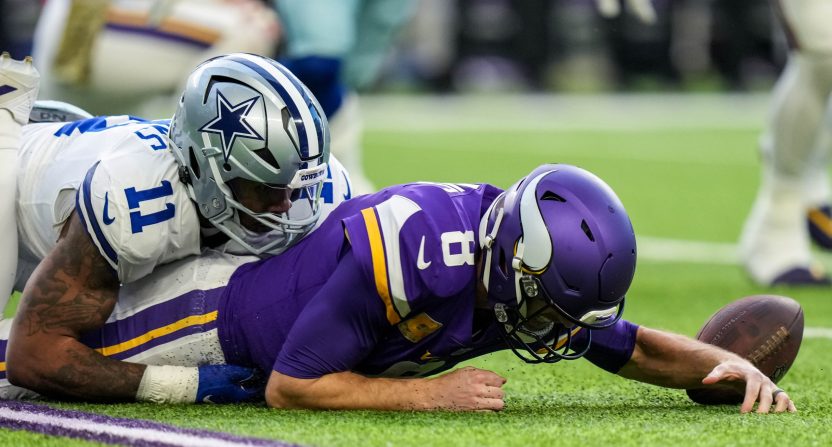 The Minnesota Vikings came into Sunday’s matchup against the Dallas Cowboys with an 8-1 record, tied with the Philadelphia Eagles for the best record in the league. But while the Eagles survived a tough game on Sunday, the Vikings weren’t nearly as fortunate.

In Week 11, Minnesota got its biggest win of the season. The Vikings shocked the Buffalo Bills with an extremely impressive offensive performance from quarterback Kirk Cousins and company.

However, the Vikings couldn’t carry that momentum over against the Cowboys in Week 12. They offered a miserable performance on offense while getting gashed by the Dallas running backs.

The duo of Ezekiel Elliott and Tony Pollard for the Cowboys ultimately combined for four touchdowns in the game, with Pollard getting his through the air while Elliott ran both of his into the end zone.

Zeke & destroy anyone who tries to stop @EzekielElliott on the goal line! 😤

We'll take @EzekielElliott at the goal line all day, everyday and two times on Sunday!

Look at @Tp__5 sprinting like a track star untouched into the end zone!

Cousins and the Vikings’ offense were also utterly dominated throughout the game, allowing seven sacks on the day including a strip-sack coming from Cowboys star Micah Parsons.

Micah Parsons is on another level. 🏈💪 pic.twitter.com/joYdOIEXHv

The Vikings ultimately lost the game 40-3 in extremely embarrassing fashion, with CBS even cutting away from the game in the third quarter due to how much of a blowout the game was.

CBS has cut away from Vikings-Cowboys and Bengals-Steelers is now on for most of the country.

Vikings-Cowboys is still in the 3rd quarter.

Sunday’s game presented the Vikings with a chance to prove that they were a real contender in the NFC.

Instead, there now appear to be serious questions about their ability to win key games, which is certainly creating some critics of the team.

This is embarrassing, @Vikings pic.twitter.com/OocMIjJkGC

I was about to shut that @vikings “game” off but then CBS did it for me. Lol.

if the network switches away from your game in the third quarter, you're not a contender

It's a long way away, but it's certainly possible the Cowboys could end up playing a wild card game at Minnesota. Vikings surely do not want to see them again after this.

The Minnesota Vikings are calling pic.twitter.com/gYfK7AHVq9

Been a @Vikings fan for 45 years and this may be the worst game I have ever seen.

Switching over to Andy Griffith rerun.

The only caveat this week for Minnesota is that both the Chicago Bears and Green Bay Packers also lost this week. So, the loss to Dallas did minimal to hurt the Vikings in the standings.

The Minnesota Vikings are still expected to be a playoff team with a huge lead in their division right now. But this terrible performance is certainly something that they would love to erase from their memories.