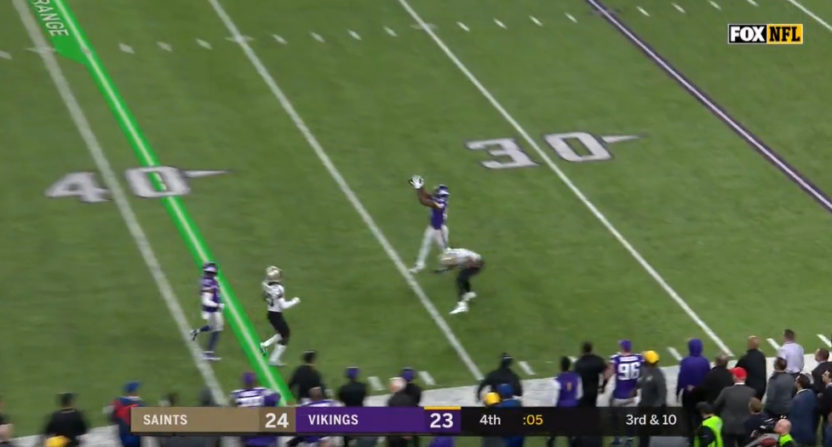 For much of Sunday’s NFL divisional playoff round game against the New Orleans Saints, the Minnesota Vikings looked sure to win. They led 17-0 at the half, and even after surrendering the lead in the fourth quarter, retook it inside the final two minutes thanks to a great catch from Adam Thielen to set up a 53-yard field goal from Kai Forbath. But a quick drive from the Saints’ Drew Brees set up a Will Lutz field goal that gave New Orleans a 24-23 lead with less than 30 seconds left, and made Minnesota look sure to lose. However, on third and 10 from his own 39, Case Keenum hit Stefon Diggs for a 61-yard touchdown to give the Vikings a 29-24 win, and also the first NFL playoff fourth-quarter touchdown with no time remaining:

There are several remarkable things on that play, from the amount of protection Keenum gets to let the play develop to the Saints’ coverage, which saw rookie safety Marcus Williams hit Diggs’ legs right around (or maybe even before) when the ball gets to him, miss pulling Diggs down, and then take out teammate Ken Crawley by mistake. It’s not certain that Crawley would have been able to catch Diggs if Williams hadn’t hit him, but it’s definitely plausible, especially as it took Diggs a second to get up to speed after the catch. It’s particularly remarkable that Williams came this far up to try and make a play rather than letting Diggs make the catch and then tackling him; the vikings had no timeouts left here, so an in-bounds tackle should have made it impossible for them to get a field goal off in time. Perhaps Williams was aggressive to try and prevent Diggs from making a catch and getting out of bounds for the field goal, but in doing so, he wound up giving up a touchdown. Williams had a good game overall, making three tackles and the Saints’ only interception of the day, but this one’s going to sting for a while. And he reportedly took it hard afterwards:

#saints Rookie safety Marcus Williams feel to his knees on his way to locker room after his missed tackle cost saints the game and then inside the locker cried with his head in his hands.

Williams did get some support from teammates and past Saints, though, including famed Saint Steve Gleason:

Marcus Williams had a spectacular rookie season, and could have a stellar career. He was trying to make the right decision and not interfere. As a competitor, I'm sure he's crushed. I invite Nola to be encouraging and supportive as well as we move on.
-SG