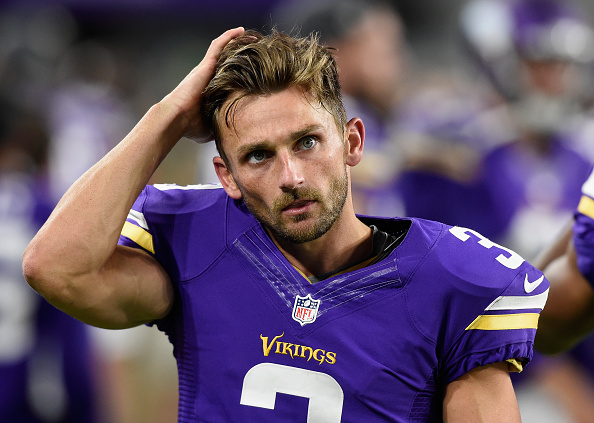 The Minnesota Vikings made an admirable decision after the 2015 season to stick with veteran kicker Blair Walsh after his horrendous miss ended the team’s playoff run in heartbreak against the Seattle Seahawks.

However, there were concerns over how Walsh would recover from a big field goal miss in the playoffs, after so many kickers before him failed to get over the mental blocks that followed their own postseason miscues.

While the Vikings’ intentions were good to give Walsh the chance at redemption this season as their starting kicker, the move has been a disaster for both parties this year. Walsh has struggled mightily under the pressure and has started to miss the easy ones on a far too frequent basis.

The situation continued to be ugly for the Vikings in Washington Sunday, as Walsh killed momentum for his team with yet another extra-point miss. Walsh’s fourth missed PAT of the season came at a time in the game where the Vikings were about to head into halftime with a strong finish to the second quarter. Another chip-shot shank from their kicker deflated a slumping team on the road.

The Vikings had a 20-point explosion in the second quarter, but after Walsh’s miss, they failed to score a single point in the second half . The turn of momentum will be a source of frustration for Vikings’ fans, who took to Twitter to vent their frustrations at their kicker after yet another day with a miss from inside of 35 yards hurt the team in the midst of what is now a four-game losing streak.

Cut Blair Walsh now. Cut him. I'm sure he's a great guy. This is enough. CUT HIM. We've been polite for to long. @Vikings

While the Vikings’ offensive line should yet again shoulder most of the blame for their recent struggles, the easiest finger to point in Minnesota this week will be towards Walsh, the most maligned player on the roster. That unpopularity amongst the fans combined with the results on the field that have caused that unpopularity should end Walsh’s five-year run with the team as soon as this week. The inevitable will likely come shortly for Walsh, especially after the Vikings spent last week working out kickers before they ultimately reached the decision to stick with him for the near future.

Vikings worked out multiple kickers today but are now planning to stick with Blair Walsh, per league source.

Walsh has been successful in his time with the Vikings, but it is in the best interest of both sides to move on at this point. The Vikings need to remove the distraction of Walsh’s struggles from their locker room to make an easy fix during this four-game losing streak, and Walsh needs to get out of Minnesota to remove the pressure from his psyche as he tries to bounce back to his former Pro Bowl level.

At 26, there is a chance that Walsh can get his confidence back and find his form for another team down the road. However, it appears that the weight of last season’s miss combined with the regression that has followed is too much for Walsh to successfully stay with the Vikings. After four straight losses, the Vikings coaching staff has to do something if they are to get things back on track. The simplest fix appears to be to move on from a player who symbolizes everything that has gone wrong for the team in the past year in a move that could arguably help both the player and the franchise.

* The New York Jets gave Bryce Petty a start on Sunday against the Los Angeles Rams, but the former Baylor star failed to show anything to change the belief that the Jets need to find a franchise quarterback in the offseason. Petty threw his first career touchdown on one nice 99-yard drive in the first half, but that was all the Jets got out of the second year passer in a 9-6 loss.

The anemic performance yet again showed the need for the Jets to finally figure out the quarterback position that has haunted the franchise for so long. Whether it has been Ryan Fitzpatrick, Geno Smith, or Petty, things have been bad under center for the Jets. If this team wants to take a serious shot at the Patriots’ hold of the AFC East one day, they will need a complete reset at quarterback to do so, as Petty is also not the answer to the Jets’ ongoing problems at the position.

*As they sit on their couches Sunday during their bye, the Oakland Raiders will not be pleased with the Carolina Panthers and the New Orleans Saints. Both NFC South teams cost the Raiders valuable ground in the tightly contested AFC West with fourth quarter meltdowns that allowed the Kansas City Chiefs and Denver Broncos to escape with road wins off the backs of their defenses creating crucial turnovers.

Cam Newton and Travis Benjamin both gave the Chiefs turnovers that allowed them to come all the way back from a 17-7 deficit to win on the road in Carolina. Eric Berry’s interception return for a touchdown and Marcus Peters’ fumble recovery in a wild fourth-quarter comeback moved the Chiefs into a tie for the AFC West lead at 7-2.

Meanwhile, in New Orleans, the Saints blew a touchdown lead of their own at the Superdome in a finish just as crazy as Panthers-Chiefs. Two costly turnovers in their own territory before a blocked PAT that was returned for two points by the Broncos ended that game with a 25-23 win for the defending champs. Drew Brees and the Saints’ game-winning drive to silence the Broncos quickly turned into a blocked PAT that kept Denver alive in the hunt for first place in the AFCW.

Needed it.
Got it.

Both finishes have major playoff implications for all four teams involved, but the impact will be felt the most in the AFC West. The Raiders went from gaining a game over both of their hated rivals to having three teams in the division standing at seven wins after Week 10. That won’t make head coach Jack Del Rio and the Raiders very happy on Monday morning, but the Saints and Panthers will be even more disappointed with meltdowns that prevented them from a move closer to the NFC South lead after an Atlanta Falcons’ loss. Come January, these two wild finishes in AFC West vs. NFC South games could have a big impact on the playoff picture in both divisions as well as the Wild Card picture.

* The Tennessee Titans moved to 5-5 on the season with a 47-25 win over the Green Bay Packers that showed the potential of an offense that could take over the AFC South one day. Marcus Mariota and DeMarco Murray’s destruction of the Packers’ defense at home served as a breakout game for a unit that has been quietly growing into a monster all season. 47 points against the Packers left little doubt that the Titans’ offense is something special, and this was a statement win.

The Titans have a chance to put pressure on the Houston Texans in the AFC South at 5-5, a turn of events that is entirely due to the work of Murray on the ground and the week to week improvement of Mariota. The Titans have scored at least 20 points in seven straight games and demand your attention after a game that showed all of the tools this exciting offense has to offer. Murray, Mariota and tight end Delanie Walker are all cornerstone pieces. If the Titans’ defense can get it together, there is a chance the high-powered Tennessee offense can lift themselves into the playoff picture despite a slow start to the season.