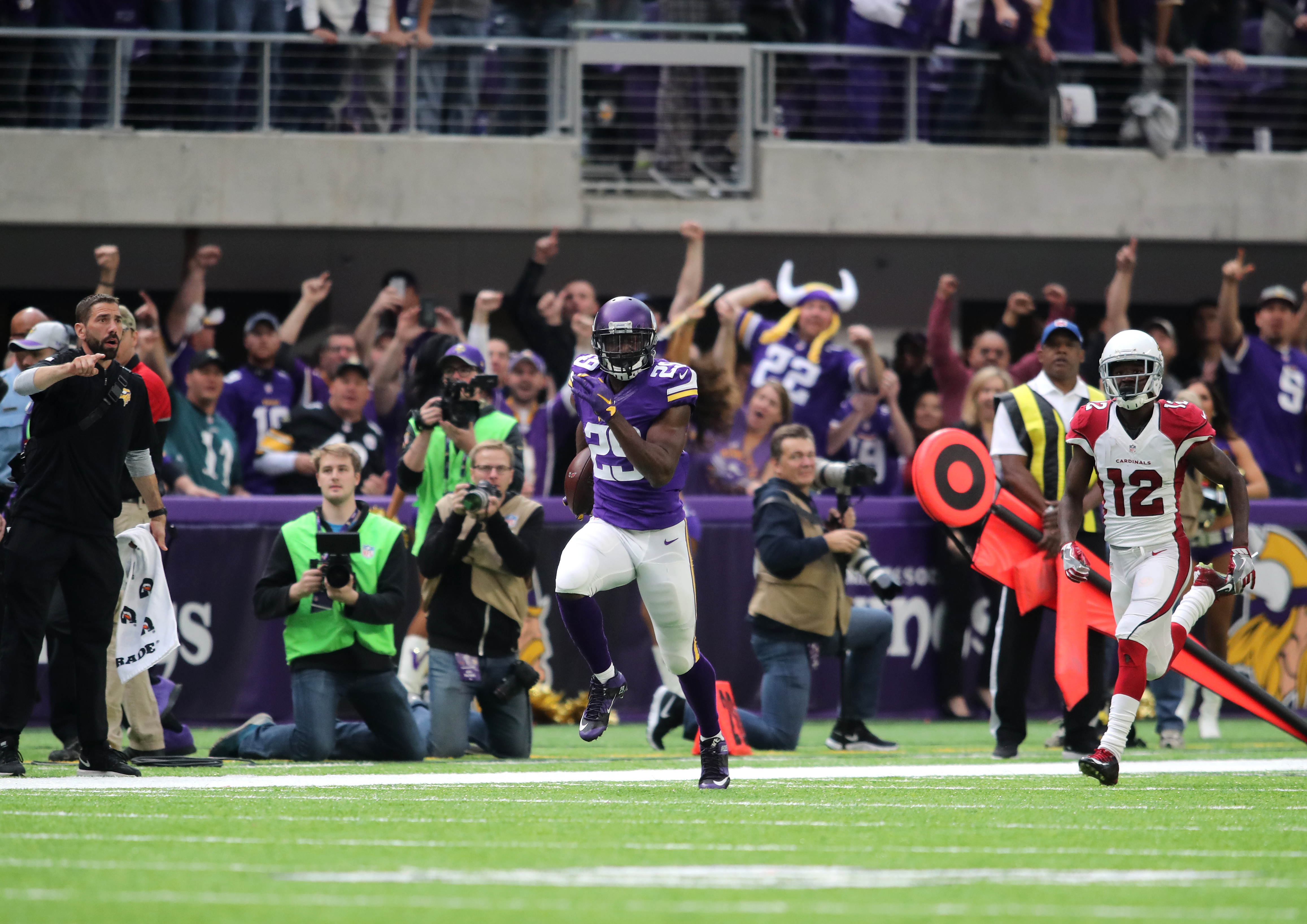 Losers of four straight games, the Minnesota Vikings had their backs against their wall before their Week 11 matchup against the Arizona Cardinals in a game that had major playoff implications for two teams teetering on the verge of falling behind in the NFC Wild Card race.

For the 5-4 Vikings, a win would end a four-game losing streak and keep them on pace with the Detroit Lions in the NFC North. While the Arizona Cardinals needed a win to climb to 5-4-1 and make some much-needed progress towards a potential Wild Card spot to set up a mid-November game with plenty on the line.

With the Vikings offensive line’s failures to protect Sam Bradford and four straight losses most expected, the Minnesota offense would be in trouble against a stout Cardinals defense despite their home field advantage. However, a turnaround from the offense has turned around their playoff fortunes while potentially handing the Cards a death blow to their aspirations of the postseason in a surprising shootout between two defensive teams.

The Vikings put up their second highest point total in a 30-24 win that was an 180-degree turn from what we have witnessed from an offense that has been anemic at best and pathetic at worst over the last month of action. Instead of continuing to fail, the entire offensive unit dug deep in a game that stunned the Cardinals defense in a game that was expected to be a low-scoring affair.

Thanks to a touchdown from both their defense and their special teams, the Vikings were allowed to operate with confidence on the offensive side of the football they lacked throughout their four-game win streak. Allowed to play with momentum for the first time in weeks thanks to the defense, the Vikings offensive line held the Cardinals to just two sacks and protected the pocket enough for Sam Bradford to have an accurate 20/28 passing performance that included a touchdown pass to Adam Thielen in the first quarter that set the tone.

The @Vikings 'flash' past the @AZCardinals after scoring a TD on offense, defense, AND special teams!#AZvsMIN pic.twitter.com/jPlOjooXLj

On the other side of the coin, the Cardinals were victimized by the poor play of their own offense and the continued regression of Carson Palmer at quarterback. Palmer threw two interceptions on the day, which included a Pick-6 in the first half that allowed for a slumping Vikings team to gain the confidence needed to pull off a home win that now puts Arizona behind the eight ball the rest of the way in the NFC.

With Palmer’s struggles and the missed opportunity of their 6-6 tie against the Seattle Seahawks, the Cardinals are now in a position where the rest of the playoff hopefuls in the NFC have the upper hand with a month and a half left to play. The Cards are now behind five teams in the Wild Card standings and have games on the road against the Atlanta Falcons, and Seattle Seahawks left on their schedule that will present significant challenges for a team that appears to be on the decline despite their recent success in the NFC West.

The Vikings had those concerns before Sunday’s game as a team that was fading fast with no progress in sight. Now with today’s win, we will see if a team headed towards a meltdown after a 5-0 start can get it back together and take the NFC North back from the Lions over the final stretch. It will take more solid play from Bradford and the offense and plenty of more big plays from the defense, but the Vikings are back in the conversation in a game that has drastically impacted the directions of two teams in the NFC’s wild Wild Card race this season.

* The Oakland Raiders and the Denver Broncos received some help from the Bucs today thanks to Tampa Bay’s big home win over the Kansas City Chiefs. 331 passing yards from Jameis Winston led the way for Tampa, while a disappointing day on offense from Alex Smith allowed the Bucs to move to 5-5 at the same time as pushing the Chiefs out of first place in the AFC West.

While the Chiefs loss will draw the most headlines in the glamorous AFC West, Winston’s incredible performance against a top Kansas City defense should demand attention. Winston has had troubles with turnovers and did throw an interception in the win, but the former first overall pick has found his stride in Year 2 in a big way. Making plays with his talented arm and adding a few well-timed plays with his legs, Winston is well on his way to becoming a franchise quarterback for a Tampa franchise that has made progress in their steady rebuild this season.

It's weird how much the Colts have the Titans number. Doesn't look like the same team that dominated Green Bay last week

* The second overall pick in the 2015 NFL Draft Marcus Mariota had less luck than his rival in Tampa Bay on Sunday as Mariota and the Titans dropped a tight affair on the road to the Indianapolis Colts to fall to third place in the AFC South. A theme too familiar to Titans fans, who have struggled to deal with their team’s inconsistencies this season in a division that would be up for grabs if they could get it together to put forth strong performances every Sunday.

After a blowout win against the Packers, the Titans fell short of forcing overtime in the fourth quarter after their comeback attempt fell just flat on 4th and 1 to the Colts. If the Titans want to take the next step with Mariota at quarterback and the veteran DeMarco Murray leading the way on the ground, head coach Mike Mularkey needs to coach up his team towards consistent play. The Titans have earned consecutive wins just once this season, which won’t get them anywhere near the playoffs as without a win streak it will be a lost season in Nashville for an exciting offense that has often fallen just short this season.

Landon Collins with the Game Sealing INT (his 4th game in a row with an INT) & the #Giants win their 5th straight.#GiantsPride pic.twitter.com/l5EfpaFvnZ

* The New York Giants earned a fifth straight win on Sunday as they beat the Chicago Bears to end a homestand in which the G-Men defended their home turf to get back in the discussion of dark horse teams that could challenge the Seattle Seahawks and Dallas Cowboys in the playoffs.

Thanks to the Cowboys ninth straight win, the Giants have yet to gain ground in the NFC East standings through this five-game stretch of wins at MetLife Stadium, but with their Week 1 win over Dallas on the road and a 7-3 record it is time to view this New York team as a contender. Eli Manning and the Giants travel to Cleveland next week before a two-week stretch that will tell us more about their chances of a potential Super Bowl run. Week 13 in Pittsburgh against the Steelers and an all-important Week 14 rematch at home against the Cowboys are the remaining big tests for the Giants after beating up on non-contenders at home for the past month plus. If the Giants can score wins in those two games, we could be looking at an Eli Manning-led team that could score some upsets reminiscent of their two Super Bowl title runs.