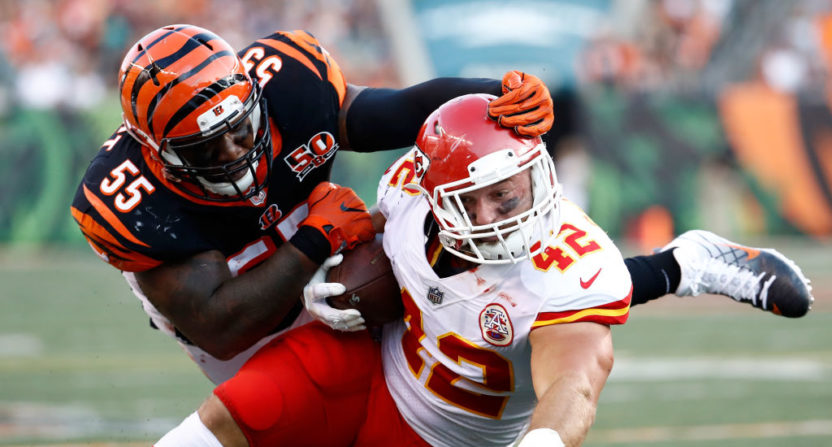 The NFL preseason has often been accused of meaning nothing, but it could mean a lot for the Cincinnati Bengals and Vontaze Burfict. Burfict could wind up missing the first five games of the 2017-18 regular season thanks to an off-ball hit in a preseason game. The Bengals’ linebacker has long been known for hard hits, and it’s one of those that has him in trouble now.

Last Saturday, in a preseason game against the Kansas City Chiefs, Burfict delivered a significant hit to Chiefs’ fullback Anthony Sherman well away from the ball. (He’s pictured above making a different hit on Sherman in that game while Sherman was carrying the ball.) ESPN’s Adam Schefter reported Sunday night that the league intends to suspend Burfict for five games:

Schefter added that Burfict plans to appeal. Here’s more information from his story:

Burfict, a repeat offender, hit a running back in a defenseless posture, per sources. It is a new rule the NFL is implementing this season to protect the player who can’t protect himself – and it is going to hurt Burfict and the Bengals.

Burfict is appealing, per sources.

…Burfict has a hearing next week with the NFL, per sources.

Here’s the hit in question:

This is the hit that the NFL is suspending Vontaze Burfict 5 games for. pic.twitter.com/Xiyab0kdrC

At the NFL level, Burfict was suspended for the first three games of last season for repeated violations of player safety rules, including an illegal hit on Steelers’ receiver Antonio Brown in the 2015-16 playoffs. He’s also totaled fines of almost $800,000 over his five-year career so far, and could lose $882,353 if his five-game suspension is upheld. He’s been flagged 16 times for unnecessary roughness, roughing the passer and personal fouls in the NFL, and he was benched in 2010 at Arizona State for his high numbers of personal fouls.

This news comes after one of Burfict’s best preseason games, too. He had a remarkable outing Sunday against Washington, notching three tackles and an impressive pick-six, complete with goal-line stiffarm:

Vontaze Burfict with a pick six on Kirk Cousins pic.twitter.com/sLxKQ4cgSl

Cincinnati lost that game 23-17 despite the highlights from Burfict (and punter Kevin Huber), though. And they might be in some trouble going forward if this suspension stands. Defensive back Adam Jones is already suspended for Week 1 against Baltimore (over a January arrest for obstruction of police), and Burfict could miss games against the Texans, Packers, Browns and Bills as well. We’ll see if this holds up on appeal, but if it does, Burfict’s preseason actions could hurt both him and the Bengals.