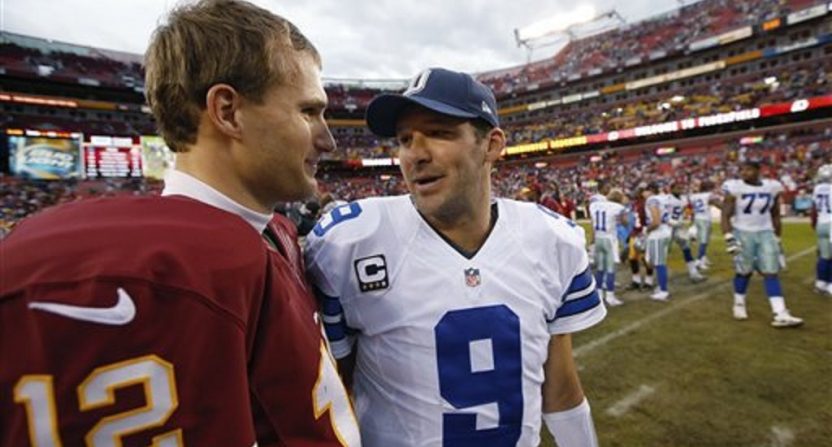 On Friday, NFL.Com’s Ian Rapoport tweeted a trade rumor that is, well, bonkers:

As #Redskins & #49ers discuss a potential deal for QB Kirk Cousins in the near future, I’m told they may include the #Cowboys (Romo) as well

If this rumor had been reported by anyone but Ian Rapoport, Adam Schefter, or Chris Mortensen, we’d quickly laugh it off. But it’s Rapoport, so we’ll take it — at least a tad — seriously.

And when you consider what these teams need, it makes some sense:

The San Francisco 49ers need a quarterback. Like literally a single quarterback, as they currently don’t have one on their roster. Colin Kaepernick recently opted out of his contract, while Blaine Gabbert, Christian Ponder, and Thad Lewis were already set to be free agents. And even if the 49ers wanted to keep any of these guys, none of them should be starting in the NFL right now. Kirk Cousins could be that starting quarterback, and would be reunited with Kyle Shanahan (current 49ers head coach; former Redskins offensive coordinator). How important is that Shanahan-Cousins relationship? There was a report earlier in the week that the 49ers are the only team Cousins would be willing to sign a long-term deal with.

Then we have the Cowboys, a team that’s actually in great shape right now. They’re coming off a 13-3 season that featured a star rookie quarterback in Dak Prescott, a star rookie running back in Ezekiel Elliot, and the league’s best offensive line. And given that they have Prescott, it’s been assumed they’d release Romo (37 in April). But in this trade scenario, they would actually get draft picks back for Romo.

But here are some reasons the trade idea seems far-fetched:

Do the 49ers really want to go all-in on on a quarterback who turns 29 in August, when they have a roster featuring holes everywhere? This was a 2-14 team in 2016, and even with Cousins, they figure to be multiple years away from being competitive. Cousins is then entering his 30s when the team is potentially ready to win. And with the assets they’d have to give up to acquire Cousins, along with what they’d have to pay him on a long-term deal, it gets more difficult to build a contender around him.

At 8-7-1, the Redskins finished well behind the Cowboys in the NFC East last season, and will enter 2017 still considered clearly below the Cowboys. And again, the Cowboys are set up well for long-term success with the star youth on the team. Acquiring Romo would likely make the team no better than they were with Cousins, and is not the long-term answer. Maybe Romo is able to give them a few good seasons, but with his recent injury history and age, it’s impossible to confidently count on. If they deal Cousins, they’re better off with seeking long-term assets than quick fixes. Oh, and we don’t even know if the Redskins have a true general manager right now.

And the Cowboys… do you really see Jerry Jones trading Romo within the NFC East? That would be very, very unlike Jerrah. The Cowboys are already the team to beat in that division and figure to be for a few years. Helping a division rival — that you play twice a year — figure out their quarterback situation doesn’t make a whole lot of sense.

So, while there are many reasons it makes sense for these teams, there are just too many question marks to expect all three teams to decide, “Yeah, let’s do it!” Either way, it’s one hell of an interesting rumor to emerge from one of the sport’s most reputable reporters, out of the NFL Combine. And could at least be a sign that some wheeling and dealing is on the way.