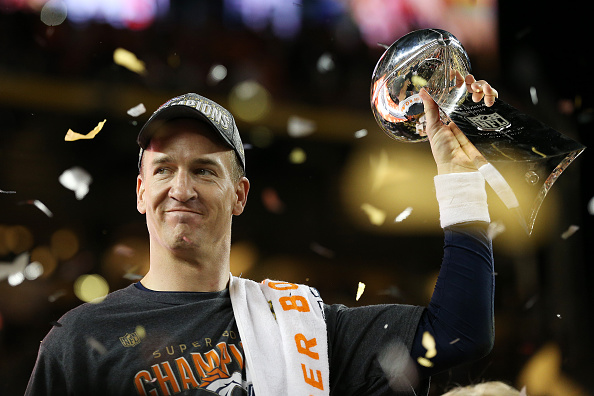 Because the narrative dictates we do so, we’ll continue to say that “Peyton Manning won Super Bowl 50.” The reality, of course, is that the Denver Broncos won Super Bowl 50. And while they didn’t necessarily win the game in spite of Manning, he didn’t do a whole lot to help.

Earl Morrall had a 54.0 rating as the primary quarterback for the Colts in Super Bowl V, but Johnny Unitas actually started that game. Unitas and Morrall combined for a terrible performance in that Super Bowl V platoon-job against Dallas, with Unitas posting a 68.1 rating before getting hurt in the second quarter. But those five are the only Super Bowl-winning quarterbacks ever to post sub-75.0 ratings in the Super Bowl.

Working in Manning’s favor is the fact that, unlike Unitas and Morrall, he completed at least half of his passes. And Unitas and Roethlisberger each had two interceptions, while Manning had just one. That said, he was lucky this first-drive throw wasn’t picked off and returned for a touchdown by Robert McClain…

Manning’s line was actually eerily similar to the one Elway posted in his penultimate Super Bowl appearance, with both completing between 54 and 57 percent of their passes for between 120 and 150 yards, zero touchdowns and one interception.

Unitas and Morrall played so long ago that it’s silly to even compare their numbers to today’s quarterbacks. Those performances weren’t drastically out of step for guys who only completed about half of their passes and had near even touchdown-to-interception ratios in the first place. At the time, their combined passer rating of 51.9 would have ranked ahead of four qualified quarterbacks — including Joe Kapp and Terry Bradshaw — over the course of the season.

With inflation, the rankings are quite clear. Even with 25 rushing yards and a rushing touchdown, Roethlisberger’s nine-completion, two-interception performance against the Seahawks in Super Bowl XL has to be considered the worst, following by Manning’s mediocre effort Sunday and Elway’s dud of a performance against the Packers (saved to a small degree by a memorable rushing touchdown). Then Morrall and Unitas split the fourth spot, ahead of Joe Theismann, who had two picks but also two touchdowns in Washington’s Super Bowl XVII victory over Miami.

That order is up for debate, but it’s hard to dispute the notion that Manning’s performance Sunday was one of the worst we’ve ever seen from a Super Bowl-winning quarterback.