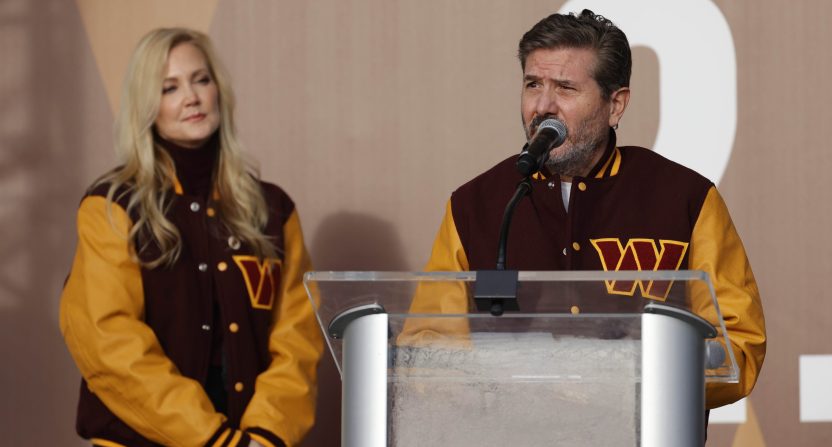 It’s not every day that an NFL franchise is the topic of its very own hearing in front of the House Committee on Oversight & Reform but that’s what Wednesday had in store for the Washington Commanders.

While the committee requested that Snyder and NFL commissioner Roger Goodell appear before them for a discussion about the NFL franchise’s alleged toxic work environment, Snyder declined to attend, citing “a longstanding Commanders-related business conflict.” He also did not change his mind after a committee spokesperson said that his refusal to appear “sends an unmistakable signal that Mr. Snyder has something to hide.”

Synder, who was on his yacht in France instead of attending the hearing, may still be forced to speak if he’s subpoenaed, apparently realized that he still needed to do something to counter the discussion about him and the allegations against him.

According to Adam Schefter, Tanya and Dan Snyder, along with team president Jason Wright, sent out a letter to members of the Commanders’ organization on Wednesday, providing their side of the story about what they’ve done to improve the workplace.

Moments ago, Tanya and Dan Snyder, along with team president Jason Wright sent out this letter to members of their organization: pic.twitter.com/X1k9ekM0Jd

The letter purports to outline the progress that the organization has made in recent years to improve and claims that the media has overlooked the work they’ve done internally.

“We feel these continuing criticisms fail to recognize and greatly undervalue your daily commitment to excellence in the workplace,” the letter reads.

Given the reputation of the Snyders, the myriad accusations of sexual harassment and misogyny within the organization, and the lack of accountability that Snyder showed on Wednesday, not many around the NFL world were impressed with the letter.

How could we have been fostering a culture of sexual harassment when we recently hired a LATINO head coach 😏😏😏 https://t.co/C55jaAnNOI

Summary: We are super NOT racist or sexist. Really! Pay no attention to the avalanche of evidence to the contrary! https://t.co/YxLpUcLl20

so the consensus from their own building is things are better now that Daniel Snyder isn’t around and he keeps embarrassing this team even while he’s away. he must know where every body is buried, man https://t.co/aOx7QShCKW

"We believe the statements that have been made in the media critical of our organization do not accurately reflect our positive transformation."

A lot of this reads like Snyder's positioning the investigation as an attack on current employees. Anyone with a brain knows it's not. https://t.co/VyDIATuMgl

if your letter is so long it requires two tweets to be screenshot/posted, you're flooding words in place of actual meaning to wash away sin https://t.co/zXTt1S5ciH

As always, it seems like the Snyders (and the NFL) are hoping that the controversy will die down. But given that the government is involved and people continue looking into the Commanders’ organization, it doesn’t appear that a letter explaining how many POC employees you have is going to cut it.