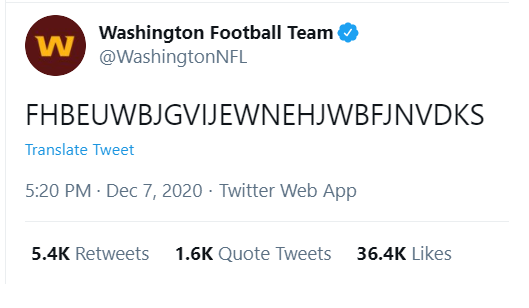 What’s gotten into the NFC East? After being the butt of NFL jokes all season, the New York Giants pulled off a stunning road win over the Seattle Seahawks as double-digit underdogs on Sunday. That was the most impressive win in the NFC East all season, at least until Monday evening; it’s now up for debate.

The Pittsburgh Steelers are no longer unbeaten, after the Washington Football Team came back to take Pittsburgh down 23-17 on Monday (a 5 p.m. ET start, and in front of very few television viewers) at Heinz Field.

Trailing 14-0, Washington outscored Pittsburgh 23-3 the rest of the way, and even after losing running back Antonio Gibson (owner of 11 touchdowns this season) in-game due to a toe injury.

With the Steelers leading 17-10 in the fourth quarter, Alex Smith and Logan Thomas connected for a 15-yard touchdown. Thomas — drafted as a quarterback by the Arizona Cardinals in 2014 out of Virginia Tech — had a huge game, with nine receptions (on nine targets) for 98 yards.

Cam Sims with ONE HAND. #WashingtonFootball

Hopkins later added another field goal in the final minute, after a Ben Roethlisberger tipped pass was intercepted by Washington linebacker Jon Bostic.

Let’s go back to Sims, because this dude had a few more amazing plays in the game. The 24-year-old had five receptions for 92 yards (18.4 AVG), and entered the game with 15 career receptions.

Hell of an effort from Cam Sims after the catch. Showed off strength, speed and elusiveness. pic.twitter.com/yMZHRWD7sW

Oh, and how about Alex Smith? 31-for-46, 296 yards, one touchdown, and no interceptions to knock off the undefeated Steelers. It’s a miracle he’s even playing football again, and he’s playing it quite well now. What an incredible story.

Washington now has a three-game winning streak, and Five Thirty Eight gives them a 41% chance to win the NFC East. They’re 5-7, just like the first-place Giants, but the Giants essentially have a one-game lead due to securing the tiebreaker with two head-to-head victories. And putting this season aside, Washington is clearly a team on the rise with a bright future, led by Chase Young and a tenacious front seven.

Even with the loss, the 11-1 Steelers are currently the No. 1 seed over the Kansas City Chiefs via the conference games record tiebreaker (the Chiefs lost to the Las Vegas Raiders). So, if the Steelers can win out, they will lock up the No. 1 seed- which includes the conference’s only bye in this year’s playoff format. But they have a very difficult game up next, against the Bills in Buffalo.