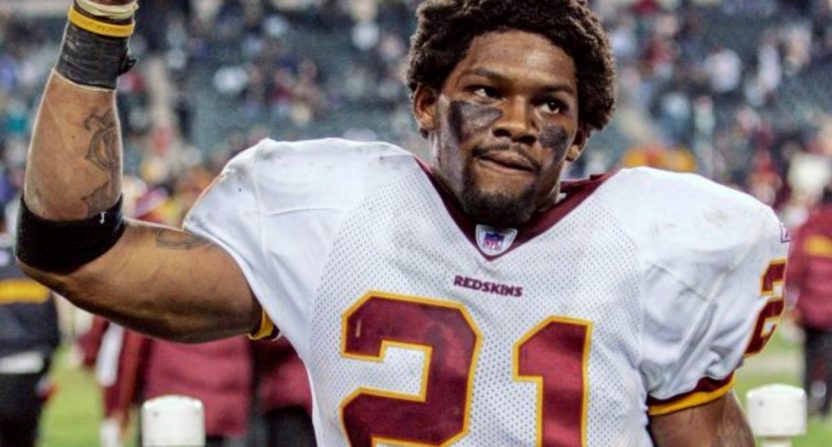 On Thursday, the Washington Football Team announced that they will be retiring Sean Taylor’s #21 before Sunday’s game against the Kansas City Chiefs. Taylor spent his entire career in Washington and was one of the top defenders in the NFL until he was murdered in his home by intruders at the age of 24.

Nobody is disputing that this isn’t an honor and it’s an honor that is deserving for Taylor and his family. It’s just that given what has happened over the past week regarding the Football Team, it really looks like Washington is trying to take advantage of Taylor’s memory to hide the bad things about them.

For nearly a week, Jon Gruden has dominated NFL headlines after he made racist, homophobic, and misogynistic remarks in emails with former Washington team president Bruce Allen and others. Gruden resigned as head coach of the Las Vegas Raiders but while everyone is talking about Gruden, Allen hasn’t been forgotten as he’s a reason why these emails surfaced in the first place.

The NFL has been investigating Washington for nearly a year for workplace misconduct around the team. It’s been out for a while that Washington reportedly mistreating their cheerleaders. One report consisted of the team taking their passports while on a photo shoot in Costa Rica and having the cheerleaders do a topless photo shoot in front of a group of male sponsors and suite holders as well as escorting these men to clubs. Within the 650,000 emails the NFL reviewed in this investigation, Gruden and Allen had exchanged topless pics of Washington cheerleaders.

As many are demanding the NFL to disclose everything they found on the Washington Football Team, the team announced Taylor’s ceremony. Washington has said that they had been planning the ceremony for months and given they had rally towels and programs made ahead of time, they seem to be telling the truth that this was planned far in advance.

The problem is that we’re about to reach the 14th anniversary that Taylor was killed and Washington had all this time to retire his number. Not only did they wait until now, amid the fallout of a scandal they themselves were in the center of, they neglected to tell anyone else they were planning to do this until three days before the game. An actual competently run organization would’ve announced this months ago so fans could buy tickets to pay tribute in-person and media can prepare tributes so we can all properly honor a man who had his life cut short.

Needless to say, I don’t buy this BS from the Washington Football Team because not only have they proven countless times they cannot read the room, they don’t even know there’s a room to begin with. Many others had similar thoughts.

I have no idea why they handled public roll out of Sean Taylor’s jersey retirement so poorly – really really poorly – but I do know the event has been planned for weeks. Something like this should be such a celebration and they announce it 3 days in advance. So so bad. And sad.

They announced Bobby Mitchell's jersey retirement in June for a September ceremony.

Even if it was pre-planned, #21 deserves better.

I think it’s clear that, like many other past players and countless countless fans, Sean Taylor deserved and deserves better than this organization

Sean Taylor's number's been unofficially retired, and so this is a good thing, and I'm happy for all Taylor's friends and family that it's happening.

They didn't retire it on the 10 year anniversary of his death in 2017.

They aren't retiring it on the anniversary of his death this year.

They're retiring it, with 4 days notice, in the midst of an off-field scandal.

Sean Taylor is the GOAT.

Don't use him as a distraction. https://t.co/3kg4EbhEMy

Sean Taylor deserves better than being used as a PR shield https://t.co/yiI1BdZhdp

1. This should've happened years ago.

2. Invoking this man's name to distract from the conversation at hand re: WFT is right on brand for Dan Snyder: shameless.

Both of these things are true.

Sean Taylor is one of my favorite players ever. I know many who feel the same. But the timing of this feels gross. Honoring Taylor’s legacy doesn’t deserve to come with a cloud of questions like it will now

At best, WAS not seeing this is sad

At worst, WAS using it is sick https://t.co/gl9kPgvyIJ

Giving fans zero notice for the retirement of Sean Taylor's number is both stupid and insulting.

Sean Taylor deserves this honor a thousand times over. Announcing this on Thursday of a week where your organization’s impropriety is again in the news is at BEST tone deaf/unaware, and at WORST the gross use of a man’s legacy as a deodorant for the situation

I will forever stan Sean Taylor as the greatest safety ever, but this timing is irritating at the least. https://t.co/0A4B1inkdO

So WFT has been planning to retire Sean Taylor's number for months but didn't say anything to anyone until 3 days before the game. Okie dokie.

Daniel Snyder and the Washington Football Team think that we’re all dumb. Anybody smart and with common sense sees this Sean Taylor jersey retirement as a PR ploy. They are using a legendary deceased player to distract from an email scandal. #NFL