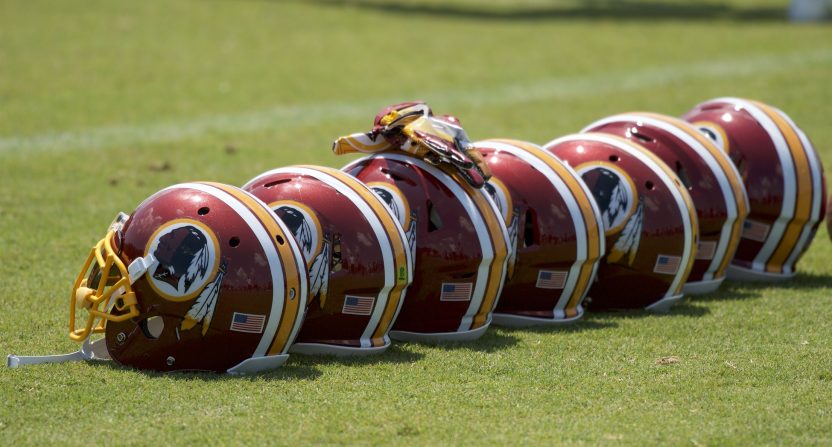 The New York Times has been all over the topic of NFL cheerleaders and the treatment they’ve received over the years from the league and its teams. In their breakout story from early April, they delved into how grossly underpaid these women are relative to the time they’re forced to commit to their jobs and duties. The story is a rundown of ways that NFL teams demean cheerleaders by forcing them into situations where they are inherently subjugated to sexual comments and lewd behavior.

In interviews with dozens of current and former cheerleaders — most of them from the N.F.L., but also representing the N.B.A. and the N.H.L. — they described systematic exploitation by teams that profit by sending them into pregame tailgating and other gatherings where they are subjected to offensive sexual comments and unwanted touches by fans.

One franchise called out in particular for mistreating cheerleaders and placing them in obviously dangerous and uncomfortable situations was the Washington Redskins. In fact, one story recounted by a former cheerleader basically sounds like the franchise hired them out for private events in much the same way strippers might.

Several years ago, she said, she and five teammates were told to drive to an address the Redskins had given them. To their surprise, it was not a business — it was a house. Inside, there was no party, no charity event, or even a large gathering of people. There were seven men in their 40s who quickly sized up the cheerleaders.

“O.K., who’s single and who’s married?” said the homeowner, according to the former cheerleader.

The men were drinking and asked the women to join in, but they declined. Then the women did a two-minute dance for the men in the basement and spent the rest of the afternoon walking around the house or having awkward conversations with the men while they were watching an N.F.L. game on TV.

Digging deeper into this mess, the New York Times returned to the topic on Wednesday with a new story about the inappropriate treatment of the women while on a 2013 photo shoot in Costa Rica.

According to the report, the Redskins took the cheerleaders’ passports from them upon arrival before sending them on a photo shoot where things got even creepier and grosser.

For the photo shoot, at the adults-only Occidental Grand Papagayo resort on Culebra Bay, some of the cheerleaders said they were required to be topless, though the photographs used for the calendar would not show nudity. Others wore nothing but body paint. Given the resort’s secluded setting, such revealing poses would not have been a concern for the women — except that the Redskins had invited spectators.

A contingent of sponsors and FedExField suite holders — all men — were granted up-close access to the photo shoots.

Afterward, the cheerleaders were told that they would have to escort some of those men, many of whom had personally selected them, to a nightclub.

“They weren’t putting a gun to our heads, but it was mandatory for us to go,” one of the cheerleaders said. “We weren’t asked, we were told. Other girls were devastated because we knew exactly what she was doing.”

According to the Times, while transportation, meals, and lodging were provided, the women were not paid for their work or time during the week-long trip.

Will all of this be a wake-up call for the NFL? It’s hard to say given the way they’ve reacted in the past to so many social and legal issues, especially those involving women. It’s hard to imagine an American institution that’s more of a “boys club” than the NFL, but in the wake of the #MeToo movement, it’s clear that these kinds of gross practices need to stop and punishment needs to be put into place to ensure that.

Unfortunately, as one of the cheerleaders interviewed for the story points out, we might not see a change on this until something really bad happens.

“It’s just not right to send cheerleaders out with strange men when some of the girls clearly don’t want to go,” one cheerleader who was there said. “But unfortunately, I feel like it won’t change until something terrible happens, like a girl is assaulted in some way, or raped. I think teams will start paying attention to this only when it’s too late.”

All of this is just the tip of the iceberg. The article also details how some team ticketholders and rich benefactors were often given intimate access to the cheerleaders, even having a say during yearly tryouts. Others say that they were encouraged to drink and flirt with sponsors often. One even says that they were told they could make lots of money by participating in certain activities aboard one luxury suite owner’s yacht.

Considering the Redskins currently have an interactive feature on their website asking fans to pick between images of two cheerleaders based on looks, an adult might need to actually step in before Dan Snyder and his slimeball employees get someone hurt.

2 thoughts on “The Washington Redskins basically treat their cheerleaders like prostitutes, per New York Times report”